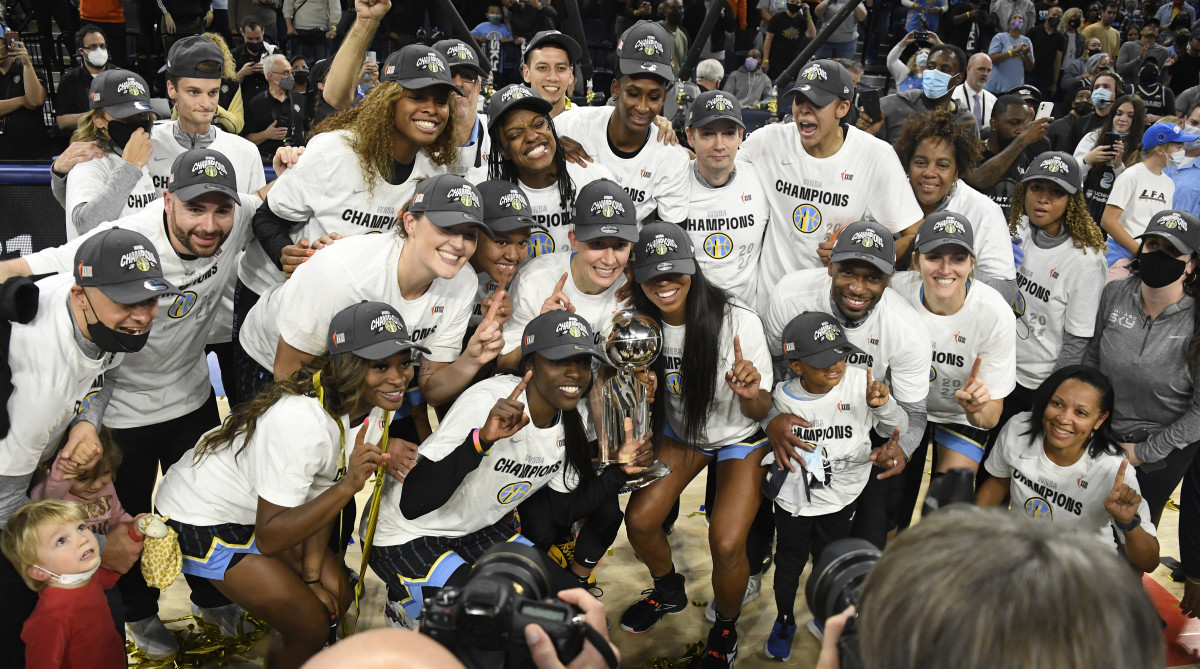 After a historic 2021 season for the WNBA, the â€™22 regular-season schedule looks to mark a new era for the league.

Coming off its most-watched season since 2008 with records set in merchandise sales and social media engagement, the WNBA is looking to capitalize off its rising popularity. Fans will have more opportunities to watch their favorite team compete during the regular season as the league has decided to increase the number of games to 36, up from 32 last season. The Commissionerâ€™s Cup competition also makes a return.

Letâ€™s take a look at some of the canâ€™t-miss WNBA games this upcoming season, which includes playoff rematches in May and July, and a former franchise starâ€™s return to Los Angeles.

After an ankle injury caused Candace Parker to miss out on all three games against her former team last season, letâ€™s cross our fingers that we’ll be able to see this marquee matchup on opening day with both teams healthy.

Emotions will certainly be running wild on both sides. Before the game even gets underway, Nneka Ogwumike and the Sparks will have to bear witness to their former franchise player receiving her second ring in a different uniform during the Skyâ€™s championship ceremony. For Los Angeles, winning the contest would be a huge step in eliminating any lingering pain from Parkerâ€™s departure. It could also be the start of a bounceback campaign for a storied franchise that shockingly missed the playoffs last season.

Chicago will be motivated to claim its first victory over the Sparks in nearly two years, as Los Angeles swept the season series last season. For Parker in particular, playing in front of her home crowd should be a more welcoming environment than a hostile L.A. crowd. A victory against her former team would certainly mean more to her than the average regular-season game.

One could argue that the 2021 WNBA second-round contest between the Storm and Mercury was one of the most thrilling matchups in league playoff history.

Phoenix took a 85â€“80 overtime victory over the Storm last season in what was considered an upset by most people, even without former MVP Breanna Stewart in the lineup. The back-and-forth contest posed many questions, the biggest one being whether it was the last time we would get to see two of the WNBAâ€™s all-time greatsâ€”Sue Bird and Diana Taurasiâ€”compete against each other.

Also, if Stewart were able to compete, would the result have been different?

If this was the last time we got to see Bird and Taurasi go head-to-head, it was a great way to finish one of the leagueâ€™s most storied rivalries. However, WNBA fans have been clamoring all offseason long for these UConn teammates to run it back one more time. One more rematch between the two players would certainly provide us with another classic game on our hands.

If the Mercury can pull this one out with a healthy Storm team, it could silence critics who claimed that a full Seattle roster wouldâ€™ve put this one away.

The typical â€œregular-season rematch of a championship gameâ€ might seem like a clichÃ©, but both the Sky and Mercury will be circling this game on their calendars as a must-win.

This one will also be a very emotional game for both teams. The last time Phoenix was at Wintrust Arena, it left without a championship in hand. While the Mercury will be motivated to enact revenge from its Finals defeat, they’ll have to do so with a new coach following the departure of Sandy Brondello.

Also, if Diana Tarusai plans on returning for an 18th season (and sheâ€™s told SI‘s Ben Pickman she does), this may be one of the last times we get to see one of the leagueâ€™s all-time greats play in a high-stakes regular-season matchup like this one.

Both the Aces and Sun came into the 2021 postseason as championship favorites but were stopped shy of a title.

The Sun, led by league MVP Jonquel Jones and Most Improved Player Brionna Jones, had one of the franchiseâ€™s best regular seasons ever and were a tough out for the Mercury, whose underdog campaign spoiled Connecticutâ€™s historic run.

As for the Aces, the franchise came off a 2020 WNBA Finals appearance in the Wubble and was looking to claim its first-ever title in 2021. But after another terrific regular season, the Aces were convincingly defeated by the Sky in only four games.

Coming off upsets last season, both teams should feel as if they have something to prove this season, and this game will be a big early-season test for each team in its quest for a championship. The matchup between Aces star Aâ€™ja Wilson and Jones will be a terrific battle between two of the league’s best forwards.

This contest will be a rematch of the 2021 WNBA playoffsâ€™ first round, where the Liberty surprised many by giving the Mercury a run for their money, nearly knocking out one of the more experienced and talented playoff contenders. But New York lost, 83â€“82.

However, if the Liberty can retain the same roster this year, it wouldnâ€™t be surprising if they knock off Phoenix with their ability to shoot from downtown. Betnijah Laney and Sabrina Ionescu are a duo who have proved to elevate their performances in big games, and their young core seems to only continue to get better.

But the Mercury have a major advantage down low with Brittney Griner, and the Liberty donâ€™t have anyone who can really slow her down. She scored 16 points and notched 10 rebounds in Phoenix’s playoff victory last season, and if Skylar Diggins-Smith and Sophie Cunningham (41 combined points in the win) can provide the same scoring output, Phoenix should have a decent chance of pulling this one out.