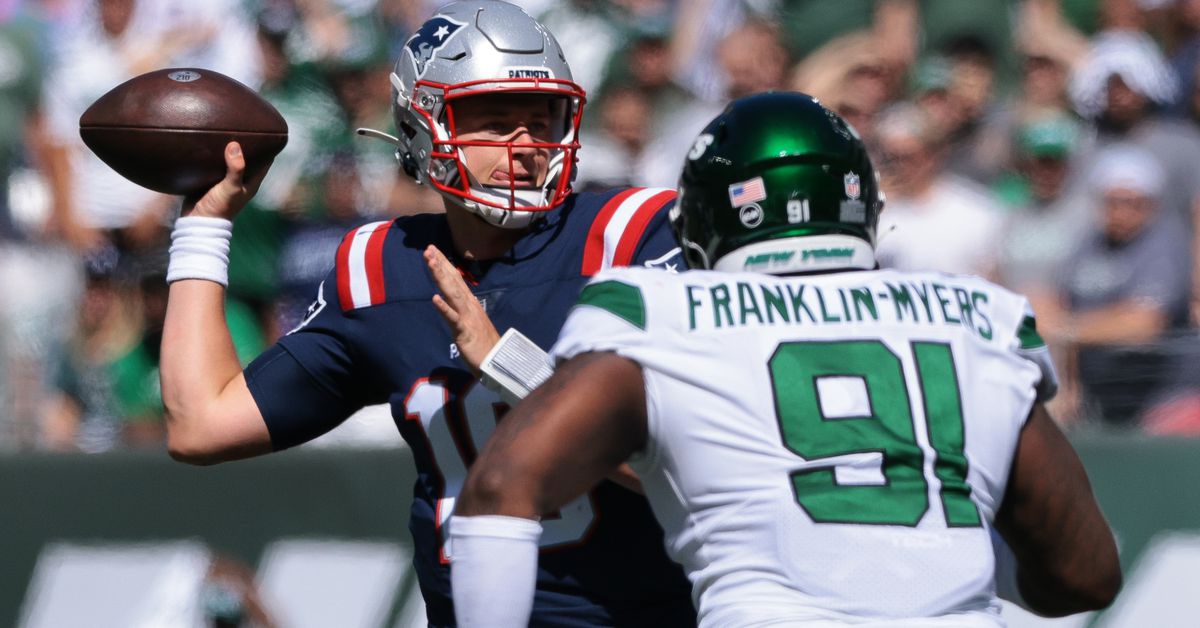 The New England Patriots are currently on a downward trend and desperately need a win. Thank goodness for the New York Jets, right?

After a three week stretch of highly intense games that came down to the wire, New England will finally see a team that they have a clear talent advantage over, and will likely be able to test out some new looks against. Whatâ€™s that? Youâ€™re saying they were in the same spot two weeks ago against the Houston Texans and floundered that opportunity? Well, then.

For as much as Patriots players themselves would like to tell you that theyâ€™re better than their 2-4 record, the fact is, they have continuously played to the level of their competition, looking like an inconsistent team that is susceptible to putting up duds at any point in process. Until they can prove otherwise, that is how they should be viewed, not just by the fans and media, but by their opponents. So that is exactly what the New York Jets will be looking to do when they visit Foxborough on Sunday.

How can New England avoid putting forth another bad performance? By winning these matchups.

Last time these two teams matched up, we talked about the importance of the Head Coach vs Rookie Quarterback matchups. Though itâ€™s often used as a crutch, the â€œBill Belichick vs Rookie QBâ€ narrative rang true, with Belichickâ€™s defense intercepting Wilson four times, leading to a walk-away victory for New England. We also touched on Jones vs Saleh, wondering how Saleh would game plan for a rookie quarterback for the first time. Well, we still donâ€™t know the answer to that.

The expectation in Week 2 was, that Robert Saleh would deploy his historically aggressive defense against Jones, forcing mistakes and taking advantage of his inexperience. Neither of those things happened. Both sides played overly conservative, with Saleh dropping seven into coverage and Jones content to take whatever was given underneath. That leaves us asking this week, whoâ€™s going to budge?

Will Saleh look to bring more pressure against the smart beyond his years rookie, or will Jones start taking advantage of the time afforded to him by the short staffed rush and push the ball downfield more? Maybe we even see both happen. How can the Patriots win this matchup? Allowing Jones to push the ball no matter what Saleh does on defense. If he continues to rush with four, that should allow Jones to move defensive backs with his eyes and make the smart throws in the intermediate area. If Saleh starts bringing the pressure, take advantage of those one-on-one situations with your big, strong , pass catchers.

This is one of the few matchups that were not available to us the first time these two teams met. Jamison Crowder, New Yorkâ€™s most dependable safety blanket, missed the Week 2 matchup with a groin injury, while Myles Bryant, New Englandâ€™s de facto nickel corner, wasnâ€™t even on their roster.

The expectation entering Sunday is that Jonathan Jones will likely be inactive, having missed the Patriots first two practices of the week. If he does make it into the lineup, heâ€™ll draw the Crowder matchup like he did in both matchups with New York last season. If he does indeed miss the game, it will be the perfect initiation for newcomer Myles Bryant, who joined the 53-man roster early in the week.

The job of Jones/Bryant is to take away Zach Wilsonâ€™s best possession receiver. Though weâ€™ve seen first hand that Wilson isnâ€™t exactly content with making the smart read, completely eliminating that early on could play a factor in his decision making as the game progresses.

So, after seeing their rookie have success against a certain defensive scheme, itâ€™s likely that New York looks to exploit that matchup in an effort to help their rookie running back gain some confidence. The same thing can be said for New England, who saw first hand just how dynamic Carter can be, meaning theyâ€™ll be keeping a watchful eye on him.

So why have his matchup focus on inside linebackers coach Jerod Mayo and not the actual inside linebackers that will be taking the field on Sunday? Simple, this matchup is about… well, the matchups. New Englandâ€™s rotation at off-ball linebacker rolls about five deep. Dontâ€™a Hightower and Jaâ€™Whaun Bentley are their workhorses in the middle, playing their best in the run game. Kyle Van Noy is the wildcard, who can play both on and off the ball but is at his best when moving downhill, and Jamie Collins and Josh Uche are their athletic freaks, each possessing the ability to effectively cover running backs out of the backfield and rush the passer. Finding the right formula on each down with Carter in the game is going to be paramount, especially for a team that hasnâ€™t quite been able to effectively substitute throughout the season.

Back in September we ran the â€œBill Belichick vs Zach Wilsonâ€ narrative in to the ground, and rightfully so. The Patriots defense did just about everything you could ask of them while making Zach Wilson look like he didnâ€™t know what he was doing. Now, they are no longer going to be afforded the element of surprise. Wilson knows what is coming, and almost certainly has a plan to counter it.

Devin McCourty made it clear what he believes Wilson can do this time around. McCourty mentioned that is was â€œnot normalâ€ how well Wilson can throw the ball across the field, emphasizing the need to cover its entirety on each play. That responsibility falls on the shoulders of McCourty himself.

Much like he did last time these teams faced off, McCourty will essentially be playing center field, only this time he will need to do so against an offense that is slowly but surely playing into the strengths of its rookie quarterback. Instead of catching pop-flyâ€™s like he did in Week 2, he may actually need to hustle to the ball that is floating to a receiver from the opposite numbers.