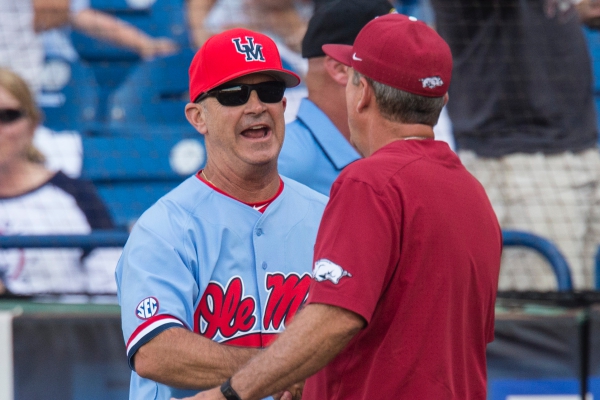 OMAHA, Neb. — Arkansas coach Dave Van Horn and Ole Miss coach Mike Bianco have coached 71 games against each other in their 20 seasons that have overlapped in the SEC, but they have never been in opposing dugouts at the College World Series.

That will change Monday when the Razorbacks play the Rebels in the winners bracket of pool play at Schwab Field, the latest in a series of big matchups between the programs that are among the titans of SEC West baseball.

“In our league, we’re always going to run into SEC teams here it seems like,” Van Horn said. “It seems like two, three or four teams make it almost every year. That’s just the way it is. You’re going to face them. If you don’t see them right out of the gate, you’ll see them.”

Arkansas and Ole Miss have combined to win division titles in nine of the past 18 seasons. Three times the programs finished top two in the SEC West standings, most recently 2018 when they split the division title.

In 2019, the Razorbacks defeated the Rebels 14-1 in Game 3 of the Fayetteville Super Regional to advance to the College World Series.

In his 22nd season at Ole Miss, Bianco is the SEC’s longest-tenured coach. Van Horn, in his 20th season, is tied for the second-longest tenure in the league with Vanderbilt’s Tim Corbin.

“We’ve had some wars with them, obviously, over the years,” Bianco said of Arkansas. “Some we’ve won and some we haven’t, but I think it comes down to they’re really good and we’ve been good. When you put two teams together that are good, usually they’re pretty good baseball games.

“We respect them a ton and what Dave has done there is an amazing job over his tenure. He’s been there almost as long as I’ve been here, so a lot of really good games and I’m certain Monday will be another one.”

The 72nd game between Van Horn- and Bianco-coached teams will add to what is believed to be a record for two SEC coaches, though there is no official statistic on record. Long-time coaches Skip Bertman of LSU and Ron Polk of Mississippi State and Georgia coached 66 games against each other between 1984-2001.

Polk and Bertman rank first and second in victories as an SEC head coach. Bianco and Van Horn rank third and fifth, respectively.

Omaha will be the fifth city in which Van Horn and Bianco have coached against each other. In addition to their home ballparks in Fayetteville and Oxford, Miss., their teams have played 10 times at the SEC Tournament in Hoover Ala., and also met at an early-season event in Minneapolis in 2007.