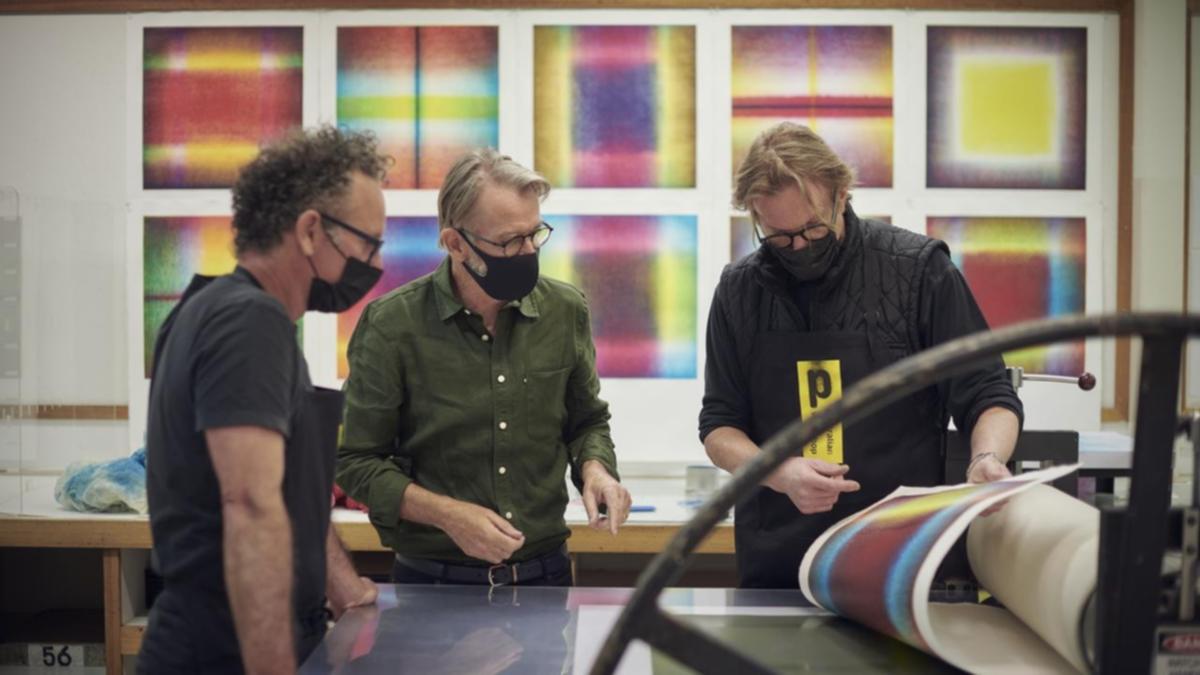 While on a recent fellowship at the Australian Print Workshop in Melbourne, Maguire decided on the design and color of her images with the flip of a dice.

Pressing a dice app on his phone, Maguire asked the printers at the shop to ink the plates in yellow, magenta or cyan, and even decided which way they would go.

What emerges is a series of 80 square prints in surprisingly vivid color fields, with simple lines or bands that could be mistaken for horizons.

They are on display at NGV Australia as part of the New Australian Printmaking exhibition, alongside works by Megan Cope, Shaun Gladwell and Patricia Piccinini.

“It’s a fantastic demonstration of the kind of exciting places printmaking can take artists…I think printmaking tends to get overlooked in the bigger scheme of things,” Maguire told AAP.

All four artists are renowned for their work in other mediums and have developed new artwork through the annual fellowship with the studio and NGV.

Workshop head printer Martin King, who began working with Maguire around 30 years ago, put the Dice Abstract plates on the presses in 2021.

“There’s something quite miraculous about the fact that the same three colors were used to give you all this range of images and colors,” he told AAP.

The show is a world-class example of top artists working with specialist engravers, a tradition that includes artists like Durer and Picasso, King said.

Piccinini, whose monumental Skywhale sculptures – which inspired a hot air balloon – captivated audiences around the world, had never been involved in printmaking before.

But for Maguire, the process became fundamental in his painting technique.

In 1987, the Mori Gallery in Sydney sent the young artist to the studio with instructions to produce the largest prints possible at the lowest cost.

He worked with the late Neil Leveson to produce his very first print, of a classic column submerged in water.

“It was the 80s, it was postmodernism, it was a little ironic and ironic,” he laughs.

The experience proved formative: Maguire was inspired by the four-color process, in which the layering of cyan, magenta, yellow and black can create any color in the spectrum.

For delicate pale tones, the ink should be diluted so that the whiteness of the paper can show through.

“I kind of fell in love with that luminosity and started applying it to my oil paintings, I do my paintings as if they were prints,” Maguire said.

He often applies color to his canvases one layer at a time, in a process known to printers as color separation.

This is standard in the printing world, with color magazines produced this way, but for an oil painter it is unusual to say the least.

His giant canvases often show the world as seen through a magnifying glass, depicting the flesh of a petal, an insect on a flower or the sparkle of a drop of water on a fruit.

The subject is drawn from the still lifes of the old Dutch masters who considered the fragility of the natural world.

There were around 44,000 possible outcomes for the Dice Abstracts project, and Maguire wryly said he was ahead of the curve considering chance just before COVID-19 hit.

“I’ve always thought life is a perilous pursuit, it didn’t take COVID for me to start thinking that way,” he told AAP.

The new Australian engraving is on display until September 11 at the Ian Potter Centre: NGV Australia.