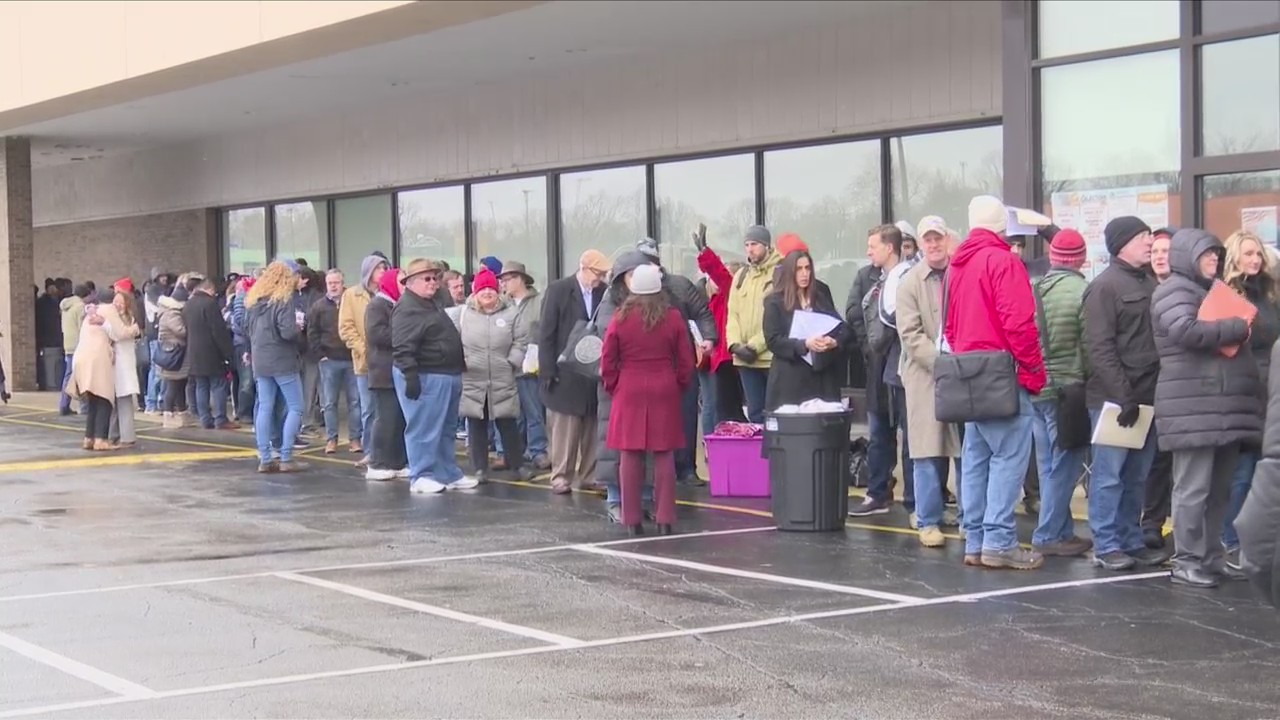 SPRINGFIELD, Ill. (WMBD) – Hundreds of Illinois political candidates lined up outside the Illinois State Board of Elections Monday morning, which is a sign filing period began in Illinois.

One of the most talked about races this year is the governor’s race.

“We are repairing the damage that Bruce Rauner has caused to our state. Remember, when we came to power, he left us with an anti-worker program. He had destroyed social services that people really needed,” Pritzker said.

Pritzker is ramping up his re-election campaign, while Republican candidates hope to retake the governor’s mansion.

WMBD spoke throughout the morning with GOP gubernatorial candidates Paul Schimpf, Darren Bailey and Gary Rabine. Each candidate explained why they believe they are the best choice to lead Illinois.

“I spent my adult life in the United States Marine Corps. I was an infantry officer and a prosecutor in the Marines. Participated in the trial of Saddam Hussein, left, returned to Illinois I got into politics, was a state senator and am running for governor now,” Schimpf said.

“We have a lot of problems. The highest property tax in the country today. It’s ridiculous. It is unfair. We need to get more red in Springfield and I think we will,” Rabine said.

All six statewide elections are up for grabs, including Illinois Secretary of State.

“I am very excited because I will be the first female secretary of state in our history. As I file today, it’s not lost on me. About the history we can make, as my little girl watches as we deliver these petitions today,” said City of Chicago Clerk Anna Valencia.

“It’s a tradition that I like to come in myself, file myself and make sure everything goes smoothly in the filing process. You are the one responsible for having your petitions and making sure that they end up where they’re supposed to go,” State Rep. Dan Brady (R-Normal) told Sheehan during a live interview on WMBD This Morning.

Statewide candidates were required to file at least 3,250 petitions, but no more than 6,500.

Sheehan spoke to congressional candidates about the situation in Ukraine.

“Overall, I think we’ve seen the heroism of Ukraine and we’ve seen the lack of leadership from the Biden administration. We need better leadership in Washington, DC and that’s why I’m running for Congress,” said Republican candidate Esther Joy King.

“I stand with the people of Ukraine first. We must do this to defend democracy around the world. I believe that our state should be a welcoming place for refugees,” said Democratic candidate Dr. Litesa Wallace.

The biggest challenge the candidates have had this election season so far has nothing to do with politics.

“It was a bit difficult because you get signings in the middle of winter. We had to get creative with organizing drive-through petition campaigns. My parents in Granite City collected 1,500 on their own,” said candidate for Secretary of State Anna Valencia.

“Always a difficult time at this time of year. Then we had COVID on top of that. There were a lot less opportunities. But you know, it’s a necessary process, and we only had ‘to find our way,’ said Republican candidate for Illinois’ 105th District, Dennis Tipsword.

One of the reasons candidates want to arrive Monday before 8 a.m. is to enter a lottery to be first on the ballot.

“If you line up at 8 a.m., your name enters a lottery, and it will determine whether your name appears first, second or third on the primary ballot. We usually have several hundred people lined up outside our door, well before 8 a.m.,” said Matt Dietrich, public information officer for the Illinois State Board of Elections.

Dietrich explained how this year’s filing period was very different from past years.

“The maps weren’t finished until much later. The primary was moved from March to June 28. They had a period of 60 days to collect their petitions, instead of 90. Therefore, they collect 1/3 less,” he said.

Regardless of which party a candidate is running in, big money can have a big impact on their electoral process.

Although this does not guarantee that they will be elected, it certainly helps to raise awareness of their campaign.

A few ways we’ve seen a lot of money play out before are in the Illinois gubernatorial race.

In mid-January, the State Board of Elections announced that Governor Pritzker had donated $90 million to his own campaign. WMBD obtained this document, as well as a document showing a $20 million donation to the campaign of GOP gubernatorial candidate Richard Irvin. Irvin’s donation came from billionaire hedge fund CEO Ken Griffin.

The Chicago Sun-Times reports that a spokesperson for Pritzker said a portion of those funds will go to other Democratic candidates and causes.

Griffin said he would pledge up to $300 million to defeat Pritzker in November.

The State Board of Elections said one-sided campaigns can use their money by hiring workers to collect petitions.

“It’s quite common for candidates to hire temp agencies to send temps to collect their signatures. It’s not uncommon,” Dietrich said.

Whether in person or using mail-in voting, voting this election season will be different than many years in the past.

While mail-in voting is still expected to be on the rise this year, Dietrich said more people will want to cast their ballots in person.

“You’re not going to have the motivation of people who really want to stay and not come out and vote. I expect to see more than the 10% in a pre-pandemic election, maybe not 1/3 of the total vote,” Dietrich said.

Illinois Treasurer Michael Frerichs sent a statement to WMBD about the filing process.

“The collection of petitions went very well and we are all thrilled to have strong statewide support,” Frerichs said. “We filed this morning with more than enough signatures and are looking forward to the next campaign. A special thank you to all the volunteers who made this possible. »

WMBD continued its coverage with many more contestants. Stay tuned for more content the rest of the week.