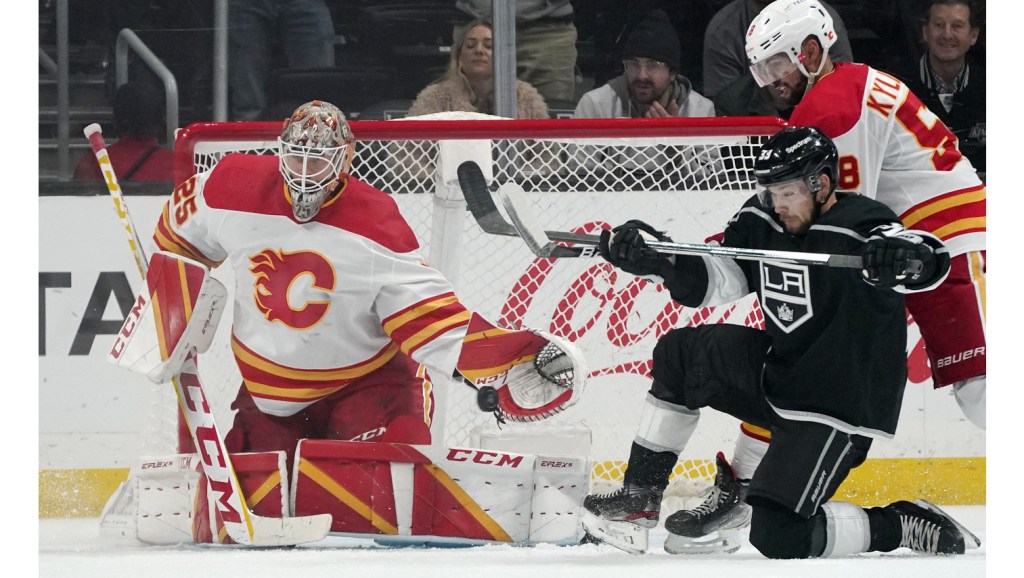 LOS ANGELES â€” On a night when Darryl Sutter was back behind the bench at Staples Center, albeit for the opposing Calgary Flames, the two-time Stanley Cup-winning coach left the arena with another victory, a 3-2 triumph over the struggling Kings.

Winger Alex Iafallo and defenseman Alex Edler each scored a goal for the Kings, who lost for the seventh time in eight games. Cal Petersen made 29 saves in his third loss in his last four appearances.

Wingers Milan Lucic, Matthew Tkachuk and Andrew Mangiapane scored for Calgary, with Mangiapane adding an assist. Jacob Markstrom turned away 40 shots as the Flames improved to a league-leading 10-2-2 on the road.

The Kings had more than a minute of six-on-five time to close the game, but they could not score and managed just one shot.

With slightly less than six minutes left in the game, winger Viktor Arvidsson launched a slap shot from above the circles that Markstrom snared with his glove as he fell backward, preserving Calgaryâ€™s lead.

The Kings headed into the second intermission down just one thanks to a goal off the rush with less than two minutes left in the second period. Arvidsson left a drop pass for his fellow Swede Edler. He skated into a wrist shot from the left faceoff dot that darted between Markstromâ€™s glove and pad for Edlerâ€™s 100th career goal and his first as a King.

Calgary created some separation 4:54 into the middle period. It was Johnny Gaudreau dishing the puck from the middle to Tkachuk on the right wing before the two wingers criss-crossed. Tkachuk zipped a rising wrist shot through Doughty and Anze Kopitar then past Petersen on the far side. Tkachuk exchanged pleasantries, shoves and more with Adrian Kempe later in the period.

There were some first-period fireworks between Doughty and Tkachuk. Doughty took Tkachuk down once. Tkachuk sent Doughty to the ice twice, one with a cross-check and one with an alert reverse hit.

Later, Tkachuk skated into Petersen, knocking the goalie down. Doughty engaged Tkachuk from behind and light punches were thrown. Tkachuk received a minor penalty, but the Kings failed to convert with the extra man as their power play was truncated by their third penalty of the first period.

On a night when three former Kings were skating for the opposition, one of them gave Calgary the lead with a power-play goal. Mangiapaneâ€™s skillfully weighted pass through traffic found Lucic, who slipped a low shot between the legs of defenseman Matt Roy and by Petersen on the far side.

Calgary had also pulled even with a power-play goal, scored by Mangiapane. Center Mikael Backlund generated a long rebound that Mangiapane found in the slot and hammered past Petersen. It was his 16th goal of the season in his 23rd game, placing Mangiapane two goals shy of the career high he set in 56 games last season.

The Kings opened the scoring just 4:30 into the game. Iafallo fought through some leaning and pushing by defenseman Erik Gudbranson to redirect Edlerâ€™s shot home for Iafalloâ€™s third goal in two games.

It was the Kingsâ€™ fourth goal scored off a deflection and the fourth on a scoring sequence initiated by a defensemanâ€™s shot in their last two games. The Kings are now 4-4-2 when scoring first this season.

Sutter coached against the Kings for the first time since leading them to Stanley Cup wins in 2012 and 2014. Sutter went 225-147-53 in six seasons with the Kings before he was fired as part of an organization overhaul following the 2016-17 campaign.

Flames forward Trevor Lewis played against the Kings for the first time. Part of those two Cup-winning teams, he had 70 goals and 93 assists in 674 games during his 12 seasons with the Kings.

More to come on this story.