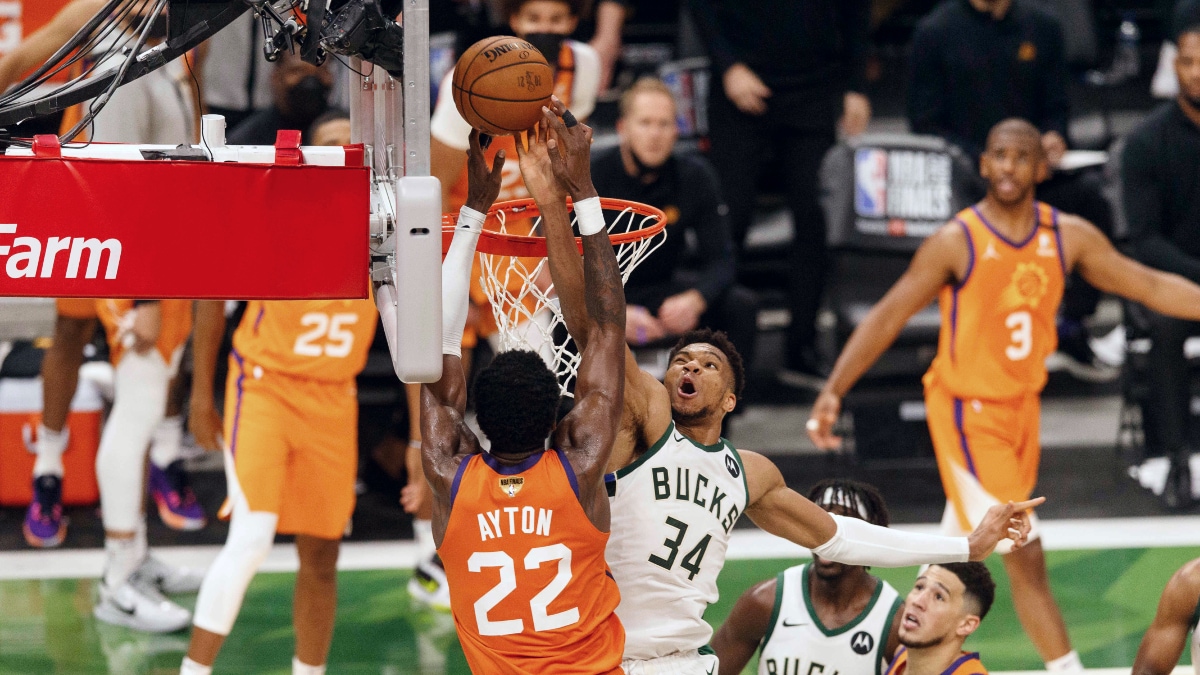 MILWAUKEE — It is not possible for a human to see the flight of the ball sail over his head, twist his body around, rely on fast-twitch fibers and reflexes to crouch in position, then leap high and block a dunk attempt by powerful a 6-foot-11 man off a lob, all in the smoldering heat of the critical closing stretch in an NBA Finals game.

Only a Freak can pull that off.

If the Bucks do capture this championship series that’s now all square at two games apiece, The Giannis Antetokounmpo Block Of Game 4 might stand as the signature play. Sure, there’s more basketball to go, and Lord knows what’s left from Giannis and — my goodness — Devin Booker, and how this topsy-turvy Finals will finish.

But there’s no questioning the context and impact of the Giannis block on Deandre Ayton and how, for all practical purposes, it possibly saved the series for the Bucks.

Because: If they go to Phoenix for Game 5 down 3-1, well, that’s a problem for Milwaukee. And with 74 seconds left in a tense and tight Game 4 that at that point could flip either way, the Bucks needed something, anything, with the persistent Suns trying to tie the game at 101-all. Especially with Booker, who tortured the Bucks all night, dribbling and searching for an opening.

The Bucks were forced to throw two men at Booker because the Suns guard, who finished with 42 points, demanded that respect. So Giannis slowly left Ayton and drew close to Booker on the screen. Booker made the right basketball play and softly tossed to Ayton, who for a split second was all alone — until he wasn’t.

With 1:14 remaining and the Bucks clinging to a 2-point lead, Giannis Antetokounmpo denies DeAndre Ayton at the rim.

“I saw the play coming,” said Giannis, “I saw it coming. I felt him rolling behind me. I was thinking, hopefully I could get there in time. I thought I was doing to get dunked on, to be honest. The only chance for me was to jump toward the rim.”

And Giannis? He bathed in the applause by doing a full-body muscle flex and showing a sneer. He knew, the Bucks knew and the Suns knew, right there and then, this was a wrap.

“So much emotions,” Giannis said. “I tried to enjoy that moment.”

In the rich history of the NBA Finals there are dozens of great defensive plays. Some come to mind: John Havlicek steals the ball, LeBron James’ chase-down swat, Michael Jordan strips Karl Malone. Because those plays directly resulted into championships, the Giannis block doesn’t belong in such distinguished company. At least not yet.

That said, the reviews …

Bucks forward Khris Middleton: “Excuse my language, it was one of those oh-(bleep) moments.”

Bucks guard Jrue Holiday: “That’s elite. An elite block. Especially the point in the game where it happened.”

Bucks guard Pat Connaughton: “Shock and awe. The best block of all time. Obviously we’re a little biased. As impressive as it gets.”

With that block, Giannis saw his reputation soar as a defensive ace and also as a big-stage player. The previous two games he scored 40-plus points. This game, he delivered at the opposite rim. He is why the Bucks stand a chance in this series after falling behind 0-2.

Ultimate Highlight: Bucks hold off Suns in Game 4, despite Devin Booker’s 42 points, to even the Finals at 2-2.

Yes, there were other factors, too, in what Budenholzer called “a mental toughness win for us” Wednesday:

Middleton was relentless and persistent and nearly succeeded in matching Booker for hotness. He scored a career playoff-high 40 points and while he wasn’t totally efficient, he stayed on the attack and kept the Suns on their heels. He took 33 shots, on a team with a two-time MVP.  He was go-to guy down the stretch with 10 consecutive points for the Bucks. He needed a big-boy game after three previous games of blah, and finally it arrived.

Holiday shook off a poor shooting effort with clutch plays in the final moments. After he and Giannis trapped Chris Paul — more on him in a bit — the Suns guard lost the ball with 32 seconds left and the Bucks only up two and Holiday grabbed it. Holiday also had a pair of rebounds in traffic in the final few minutes and suddenly, the 4-for-20 shooting meant nothing.

“I always stay locked-in even if my shot’s not falling,” he said.

As for Paul: It was a nightmare game for him. He was not The Chris Paul you know. He looked whipped, confused, shook and made careless mistakes for much of the night — totally out of basketball character for him. He played 37 minutes and was spooked once again by turnovers; those five in Game 4 mean he now has 15 in his last three games. When he stumbled and lost control of the ball in the final minute, that captured his entire night. When’s the last time the stage looked too big for Paul? When’s the last time The Point God had this level of a meltdown?

Essentially, the Suns wasted a tremendous chance and also Booker’s bounce-back game. Booker was simply unguardable, a handful for Tucker and at times Holiday. After shooting 3-for-14 three nights earlier, Booker came out scorching, dropping mid-range shots all over the floor and did so with a hand or two in his face. Yes, most of his 17 makes (out of 38 tries) were contested.

The NBA TV panel breaks down Devin Booker’s offensive explosion in Game 4 even as foul trouble kept him limited.

Curiously, Booker dealt with foul problems and seemingly earned his sixth foul with 3:40 left when, on a Bucks’ breakaway layup, he stuck a hand on Holiday’s waist and a slap on Holiday’s shooting arm. Yet, no whistle.

When asked about the non-call, Holiday said: “I dunno. Man, I dunno. I dunno.”

Here’s what the Bucks do know: They have new life because of what happened about two minutes after that play.

The Bucks are thrilled that, with his big block, Giannis not only finished strong, but didn’t mysteriously disappear as he did near the start of the game. In a giggly, humorous moment following the win, Giannis explained he left the court and returned to the locker room in the first quarter because: “I went to, how you guys say, take a tinkle.”

There was no such urge when the Bucks needed him the most. Giannis had a big hand, quite literally, in the most important game of his era in Milwaukee. It was the block that swatted the Suns all the way back to Phoenix, where they might be feeling dazed, even a bit confused, at how this series is suddenly up for grabs.

Shaun Powell has covered the NBA for more than 25 years. You can e-mail him here, find his archive here and follow him on Twitter.

The views on this page do not necessarily reflect the views of the NBA, its clubs or Turner Broadcasting.