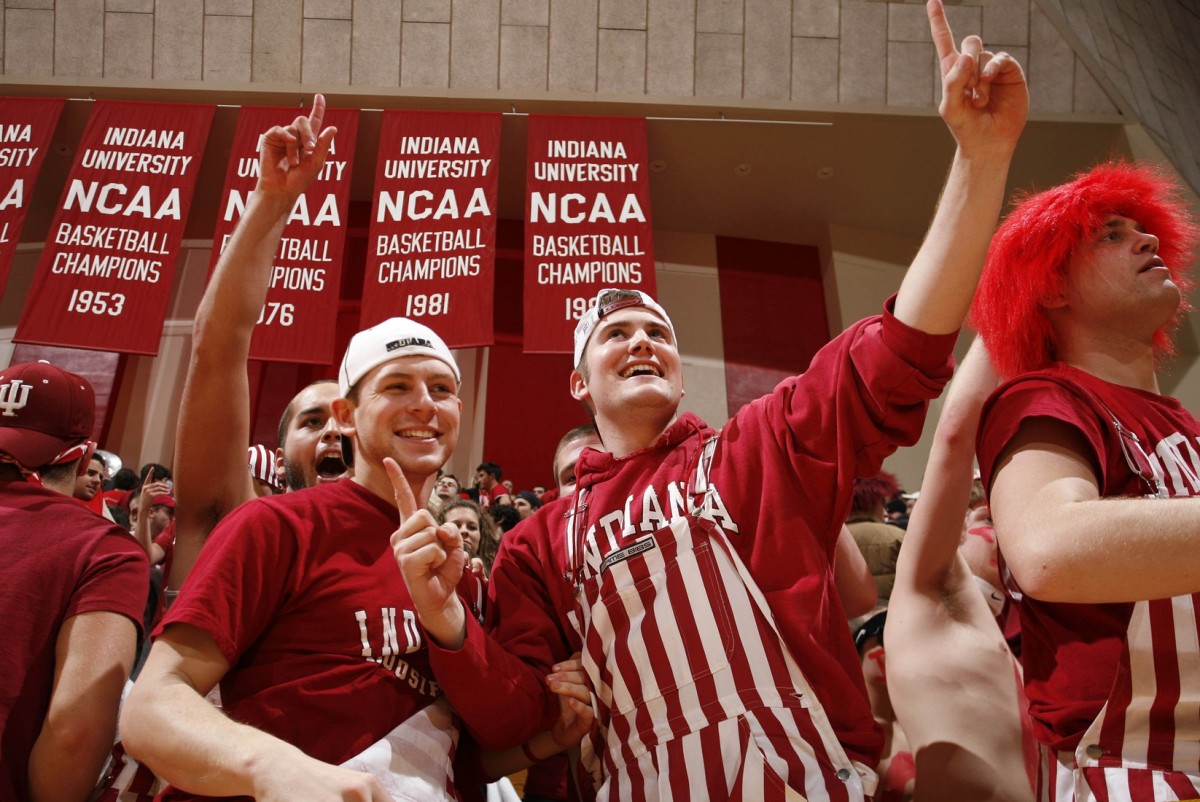 BLOOMINGTON, Ind. â€” Welcome to Simon Skjodt Assembly Hall, where the Indiana Hoosiers have some late-night basketball on Wednesday night.

It’s a big one, too, for the 2-0 Hoosiers, who get their first stern test tonight against St. John’s from the Big East. This is a Gavitt Games matchup, where the Big East has pulled off four straight upsets to take a 4-0 lead.

That’s not great news for the Hoosiers, who are now just 4.5-point favorites after opening as 6.5-point favorites this morning, according to the SISportsbook.com website. Here’s the latest on the point spread movement.Â CLICK HERE

The game is on FOX Sports 1, with a scheduled tip time of 9:12 p.m. ET. Here’s how to watch the game, with all sorts of news and nuggets to preview the outing as well. CLICK HERE

If you’re not familiar with our live blog, we’ll post news and views in real time on the game, so you can follow along on what’s happening here inside Assembly Hall. The latest items are on the top, so just refresh to follow along.

11:29 â€” Mike Woodson puts Jordan Geronimo in for Trayce Jackson-Davis and he smothers Champagnie deep on. the perimeter. He forces up a 28-footer that doesn’t go, and Indiana hangs on the win 76-74. FINAL â€” INDIANA 76, ST. JOHN’S 74. STORY TO COME

11:26 p.m. â€” Indiana does a good job defensively on Julian Champagnie, and forces him off the three-point line thanks to a nice aggressive switch by Xavier Johnson. He drives instead, and settles for two. Indiana up 75-74 with a timeout at 11.1 seconds. Johnson is fouled with 8.4 seconds to go. He misses the first, but makes the second. It’s 76-74.Â

11:19 â€” St. John’s guard Post Alexander is fouled. He makes the first one with 54.2 seconds to go, and then Indiana calls timeout. Makes the second, and it’s 73-72. Indiana runs clock and just before the shot clock expires, Race Thompson hits a runner in the lane to put the Hoosiers back up 75-72. Assembly Hall is freakin’ electric with 21.5 seconds to go. St. John’s calls timeout.

11:15 p.mÂ  â€”Â Julian Champagnie hits another three-point basket to cut the lead to one. He’s got 30 points now. But Trayce Jackson-Davis gets an offensive rebound and scores on the other end to make it 71-68. Stef Smith scores in the lane to get it back to one, but then Xavier Johnson beats him off the dribble and scores, plus he’s fouled. He misses the free throw though. 73-70.

11:10 â€” We’re tied again on a Julian Champagnie three-pointer, but Trayce Jackson-Davis answers with a baby hook on the other end. He also blocks a shot and takes a charge on the next two St. John’s possessions. Race Thompson scores for the Hoosiers, and it’s 69-65 with 3:18 to go. The final media timeout.

11:08 p.m. â€” Jordan Geronimo is having a terrific second half for Indiana. He has seven points and has made all three shots to put Indiana back in the lead. He comes out at the 5:13 mark and gets a huge hand from the appreciate Indiana crowd. Lander out too, and he gets a big hand as well.Â

10:59 p.m. â€” It got very loud in here during that stretch. And if you’re curious, there are several thousand empty seats here. They will announce a sellout crowd here, but it’s not full.Â

10:57 p;.m. â€” Indiana answers right back though, with a three from Jordan Geronimo and then a basket from Khristian Lander, who drove the length of the court for a score. We’re at the world’s greatest timeout, and it’s back to 61-56 Indiana with 7:49 to go.Â

10:49 p.m. â€” Xavier Johnson picks up his fourth foul at the 11:15 mark, and Mike Woodson turns to sophomore Khristian Lander instead of Rob Phinisee at point guard.Â

10:43 â€” Trayce Jackson-Davis has had several lazy passes out of double teams tonight. He’s got three turnovers already. The lead is back down to three at 52-49 with 12:23 to go. Xavier Johnson comes back in and immediately drives to the hoop and scores. We’re at the second media timeout, and it’s IndianaÂ

10:38 p.m. â€” Indiana’s lead shrinks to three, but Miller Kopp hits another floater in the lane. He’s been much more aggressive tonight in attacking the balance and looking to score.

10:28 p.m. â€” Lethargic start for the Hoosiers, as they watch St. John’s go on a 10-2 run to get back in the game. Suddenly 42-37 now. Xavier Johnson picks up his third foul on a bogus offensive foul, and he’s forced to the bench. Rob Phinisee comes in. Critical moment, because Phinisee wasn’t very good in the first half. He was 0-for-3 shooting and had two turnovers.

HALFTIME: We’re at the break and Indiana leads 39-27. Tamar Bates leads Indiana with those 11 points. Race Thompson has 9, and Trayce Jackson-Davis 8. Indiana shot 51.6 percent from the field, and were 4-for-12 from three-point range. Xavier Johnson, Miller Kopp, Bates and Parker Stewart each have a three. St. John’s is shooting just 33.3 percent from the field. They were averaging 105 points per game coming in, and were averaging 53 points in their two first halves against Mississippi State and St. Peter’s.

9:50 â€” Indiana is doing a great job of attacking the St. John’s pressure, and they’re doing it with everyone. Trayce Jackson-Davis brought the ball up quickly and hit Race Thompson with a perfect pass for a dunk. Indiana leads 29-18.

9:45 â€” Trey Galloway gets a steal and drives to the hoop. He’s clobbered by St. John’s guard Montez Mathis, and hits the floor hard. The officials stop play to review the foul and call it a Flagrant-2 and Mathis is ejected. This game has been very chippy throughout, but that was a cheap shot for sure. Miller Kopp comes in for Galloway and makes both free throws. Tamar Bates hits another jumper and suddenly it’s 27-14 Indiana.Â

9:37 â€” Rob Phinisee dives to the floor for a loose ball, and forces a jump ball. Indiana gets it on the alternate possession. Hoosiers’ defense has been great. St. John’s has been held scoreless for 6 1/2 minutes. At the third media timeout (7:56), it’s Indiana 18, St. John’s 10.Â Â

9:36 p.m. â€” Back-to-back blocks by Trayce Jackson-Davis on the defensive end. Such a bigger part of his game this year. He’s gassed though, at the 9:16 mark, and gets a blow. Michael Durr, the 7-foot transfer from South Florida, gets him.

9:35 p.m. â€” Forward Aaron Wheeler enters the game for St. John’s. If the name sounds familiar, it’s because he played at Purdue for three years before transferring this summer when the Boilermakers’ frontcourt rotation got really crowded. Trey Galloway and Jordan Geronimo for Indiana.

9:30 p.m. â€” Lots of interest in how true freshman Tamar Bates would play in this game, his first against a higher level of competition. He attacks the lane and hits a lefty floater to put Indiana up 16-10. Second media timeout at 11:11. Aces.

9:25 p.m. â€” Rob Phinisee the first guy off the bench for Indiana, and the Hoosiers go small as he replaces Miller Kopp. Trayce Jackson-Davis, who was jawing with St. John’s Joel Soriano before the timeout, dunks in his face and gives him a glare on the way downcourt. Indiana 14-10. Tamar Bates in now, subbing for Parker Stewart.

9:23 p.m. â€” That was a frantic first six minutes, where the clock never stopped and the pace was quick. Trayce Jackson-Davis steps on the baseline for a turnover to finally get the first media timeout at 14:05. Indiana leads 12-10.Â

9:20 p.m. â€” Good start offensively for the Hoosiers. Xavier Johnson hits a three in the left corner for the first IU points of the game and then Trayce Jackson-Davis hits a 16-footer. Parker Stewart hits a three to put Indiana up 12-7. That’s a much-needed confidence booster.

8:55 p.m. â€” Indiana in the traditional home white uniforms, and all players are in matching white Adidas shoes.Â

8:45 p.m. â€” The same starting five tonight for Indiana, with Trayce Jackson-Davis and Race Thompson up front, and Parker Stewart, Miller Kopp and Xavier Johnson on the perimeter. That unit has started all three games.

8:25 p.m. â€”Â Indiana junior Trayce Jackson-Davis moved into 54th all-time in career points with 989 points with his 19 points against Northern Illinois, passing Matt Nover. He was also named the Big Ten’s Player of the Week, the third time he’s earned the honor in his career. He needs 11 points to join the 1,000-point club.

8:20 p.m. â€”Â Pride is at stake for Indiana tonight because the Big Ten has been getting boat-raced in the Gavitt Games. The Big East is 4-0 so far, winning all four games as underdogs, too. There are two games tonight, this one and Michigan State at Butler.