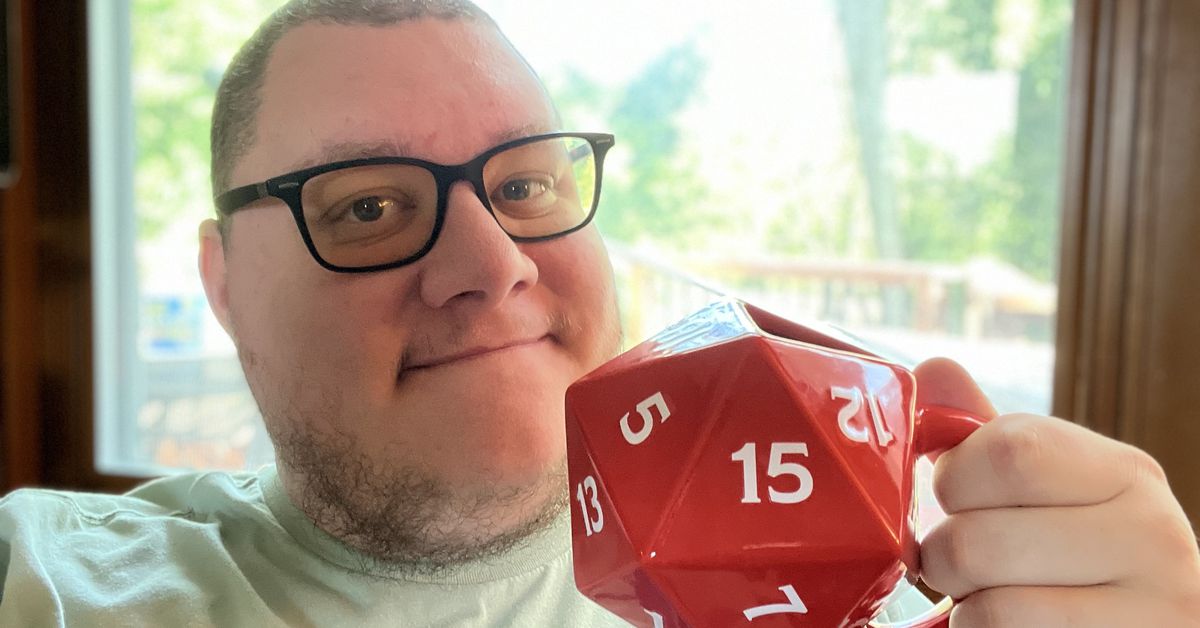 Dungeons & Dragons TikToker Jake Pauwels doesn’t start his videos with rulebooks or character sheets, but rather with paper plates and sandwich ingredients. Over many lunches this spring, the high-fantasy writer and Dungeon Master wrote down lists of everything he had in his fridge on a series of plates and used dice rolls to decide which Frankenstein sandwich he wanted. will build before eating his creation. He now has over 800,000 followers on TikTok, many of whom come to Roll for Sandwichwhose popularity skyrocketed.

Pauwels usually begins by rolling a six-sided die into a magnificent dice tower, which is placed next to a plate or paper with a board noting the possible ingredients. Whichever side it lands on, it matches a type of bread first, with options ranging from naan to croissants, then mains, from corned beef to peanut butter. Next is Cheese, “Roughage,” and Wild Magic – which uses a D20 die and adds anything from spices to fire nuggets. Finally comes the table of risky sauces, which could alter the whole taste profile with chocolate frosting or spruce tip jam. He then assembles the complete, though perhaps dubious, sandwich. Roll for Sandwich has since produced dozens of episodes, from roast beef and marshmallow fluff sammies to a horseradish bagel and hearts of palm pretzel. That’s not all an ick factor – many of the combos are wonderful and teach both Pauwels and the viewer something about flavor.

As a stay-at-home dad, Pauwels started the series as a fun way to revamp D&D gameplay with components he had around his house, especially after grocery shopping, he told Polygon. Since the first episodes, the quality of the production has expanded with custom dice, a dice tower to help throw them, and a chainmail glove and ax to help cut the sandwiches – the wielding of which has temporarily slapped Pauwels with a violation of TikTok community guidelines. His insightful and descriptive voiceover has remained consistent throughout the series. He first added it out of necessity so as not to wake his young daughter, who was sleeping just outside the frame of the sandwich-making station.

Roll for Sandwich was an instant hit on TikTok, with thousands of feedback for each new episode and some even asking for permission to launch their own dice-rolling series, like Jared Frazier’s Cocktail Roll. Pauwels video chatted with Polygon to discuss the happy accidents of cinnamon raisins, the end of the Sandwich season, and the joy of chance in acting and storytelling. His answers have been edited for length and clarity.

Polygon: Do you finish every sandwich?

Paulwell: Yes, it was important for the concept of the show. Rolling for a randomly generated lunch that I can just throw away if I don’t like it doesn’t carry the same weight. The rolls you make in D&D have real consequences. Well, real fantastic consequences. I was hoping to embody that in this project. And it’s not like I’m putting anything dangerous on this list – I can suffer for five minutes eating a bad sandwich to maintain the integrity of the show and provide entertainment for people.

And there’s so much food waste on TikTok where people do horrible, horrible things for views and don’t eat them. I’m not financially in a situation where I can buy a bunch of groceries and throw away half of them every week.

Is there a food combo you got at random that was surprisingly successful for you?

There’s something chaotically joyful about letting fate decide what you eat. Why do you think it’s so fun to watch shows or play games that incorporate similar randomness?

The beauty of the true randomness of the dice rolling system is that you have the potential for two different outcomes; both are nice when you’re sitting with your friends and playing a game. You have the critical hits/hits that move the story forward, then you have the critical misses that provide comedy or situations you don’t. hadn’t planned at all. It really makes it a community experience. If I wanted to tell the whole story, I would continue to write my book.

If people find out about your D&D and world-building account through your Roll for Sandwich videos, is there one thing to remember that you would like them to leave your account at?

It’s good to have an open mind about food, because it may surprise you. I got tons of messages from people saying “you’ve helped me so much with my eating disorder”. I’ve had long messages about how watching myself take risks with food has helped people who may have sensory issues or food aversions, things I didn’t expect but are awesome. Many people have commented on my videos saying, “I’ve never really been into D&D, but these make me want to give it a try.”

What do they see in your lunchtime series that turns them into tabletop role-playing games?

I think part of it is the unexpectedness of rolling and the excitement of saying, “We just missed having a crab, cheese, and chocolate sauce sandwich again.” This is the heart of role-playing. Any unintended outcome in a video game is simply because you didn’t expect it to happen, but it was programmed as a possibility. Whereas in D&D, what happened only happened to you. You get to live a life that is just as unique as your own life.

Along the same lines, you discussed how Adventures in Aardia is your main account now, even though you didn’t intend to, and you have many DM/fantasy author aspects on your account you also want to use. How do you plan to use the success of Roll for Sandwich to bolster those other passions, like the high fantasy novel you’re writing?

I definitely plan to use this as a platform to talk about it while continuing to do the Roll for Sandwich, do the things you know the majority of people are here for. It’s not like I’m completely famous for food and then all of a sudden I’m like, “Hey, I wrote this fantastic book.” It’s in my account name. I have plans this summer to take some time off Roll for Sandwich like the end of season 1, leading into season 2. I can focus on working on my novel and maybe share some of that content on the channel as well.

Will season 2 change mechanically in any way?

Not a lot! Maybe 30% of my comments on every video are about rolling twice for it, rolling for how toasty it is. I thought about most of these things. I can’t do them all. I’m already pushing the limits of the length of TikTok videos to three minutes. But I keep experimenting with what I can do – I just got a propane pastry torch.

Roll for Sandwich was born out of you being the dungeon master for a D&D campaign, but before that what was your favorite D&D character?

My most recent character before starting the DM was a Warforged monk, built by a guild of assassins as a mindless killer automaton. They had no name but a designation, which was Guild Requisition Elimination Golem: GREG.