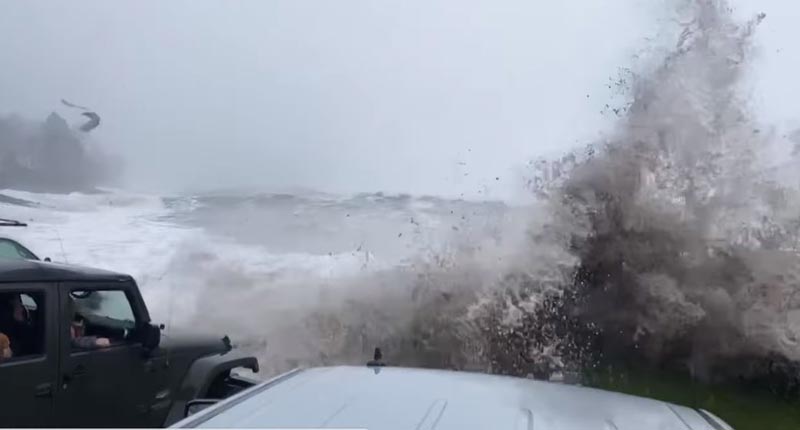 (Oregon Coast) – After a few days of staggering waves along the Oregon and Washington coast, flooding and even high winds, Wednesday will give even more. The National Weather Service (NWS) issued a variety of alerts for the Washington and Oregon coasts until Wednesday morning or even afternoon. (Photo above courtesy of Seaside’s Tiffany Boothe: Big waves hit unsuspecting visitors in their cars at Seaside’s The Cove).

As the royal tides continue to roll in one more day, Oregon’s breakers are pushed even higher on Wednesday. Flooding hit many parts of the Oregon coast hard on Tuesday and likely will be again. There is no specific surf warning for the coasts, but the high tides combine with the royal tides around noon along the northwest. These will be around over nine feet or more. Extreme caution is required and you should stay away from all Pacific Northwest beaches during these tides. King Tides Drama Series Finale for Oregon / Washington Coast: Photogs Required

Flood monitoring for the North Oregon Coast and the South Washington Coast. The NWS issued a flood watch over most of northwestern Oregon and southwestern Washington until Wednesday morning.

“Periods of heavy rain likely this evening and Wednesday morning over areas of the Oregon Coast Ranges and the Cascades as a deep plume of moisture continues to flow ashore from the Pacific Ocean,” said the NWS. “Total precipitation between 1 and 2 inches has already fallen in most parts of the valley, with precipitation seen so far in the Coast Range and parts of the waterfalls ranging from 3 to 6 inches by early Tuesday evening.

Rainfall could reach more than two inches in the coastal beach on Wednesday, the NWS said.

Photo above courtesy of Seaside Aquarium

There are flood warnings for some rivers in Lincoln County, Lane County, Clatsop County, and along the Nehalem and Wilson rivers. The warning is in effect until Wednesday afternoon.

Strong wind warning for the central and south coast of Oregon. For the Lincoln City, Newport, Yachats, Florence, Reedsport, Coos Bay and Bandon areas, the NWS issued a strong wind warning in effect from early morning until late morning Wednesday.

The most affected areas will be the headlands, such as Cape Foulweather, Cape Perpetua, Cape Blanco or Cape Arago. Southerly winds of 25 to 35 mph with gusts of up to 75 mph are expected. Further north in Lincoln County, winds are expected to be slightly lower.

Strong wind advisory for the central and north Washington coast. The advisory is in effect until 6 a.m. Wednesday, with gusts in the 1950s expected. It’s for all of Northwestern Washington, including Seattle, Bremerton, and the Interior and Outer Coast. More storm photos below:

LATEST articles on the Oregon Coast

Weezer’s ‘OK Human’ is at the forefront of this week’s new...