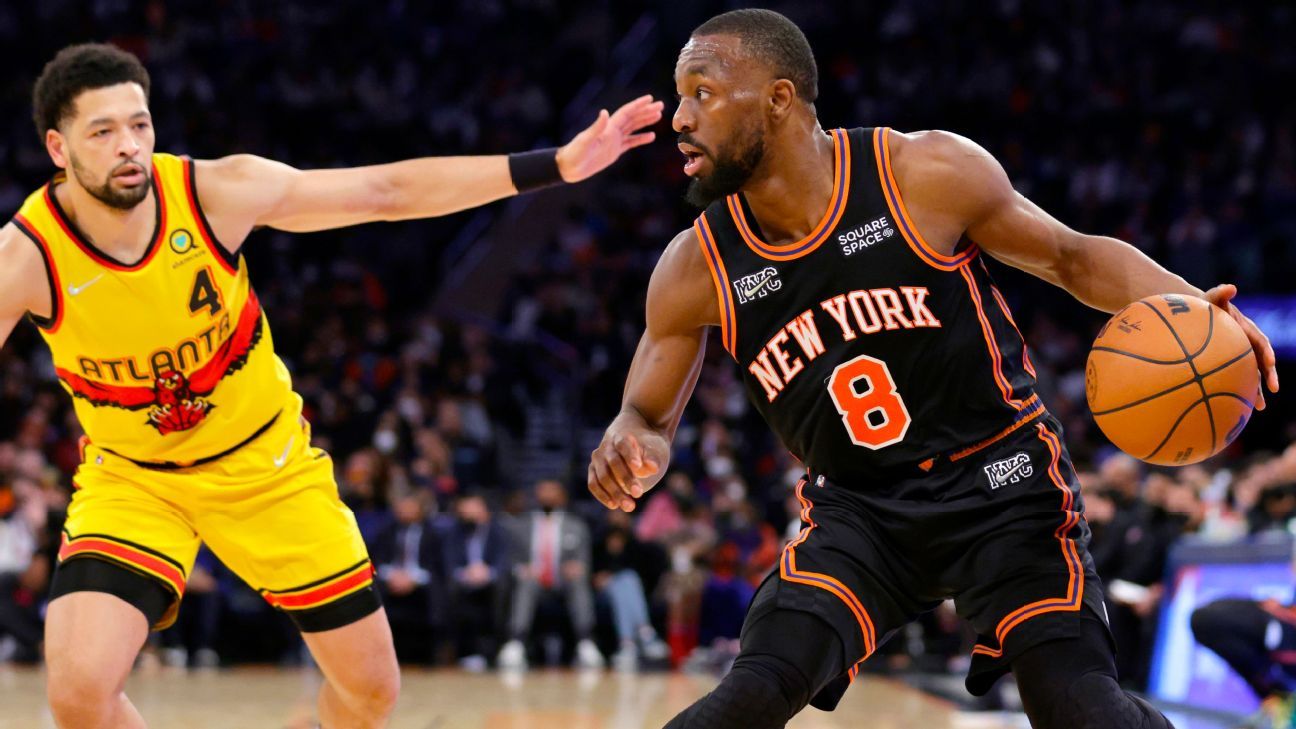 NEW YORK — Kemba Walker’s Christmas began with him being officially given back his starting point guard spot.

He then delivered Knicks fans a 101-87 victory over the Trae Young-less Atlanta Hawks here at Madison Square Garden, and did so in style: by recording the third triple-double of his career, and the first-ever by a Knick on Christmas Day.

“It was amazing,” Walker said after finishing with 10 points, 10 rebounds and 12 assists in 40 minutes in New York’s matinee win Saturday afternoon, becoming the seventh player to record a triple-double on Christmas in NBA history. “Those are moments you dream about, you know?

“It’s kind of hard to put it into words, to be honest. It was special, just to be home, with that New York on my chest … a New York City kid, born and raised. It felt amazing.”

Saturday marked Walker’s fourth game back on the court for New York since coach Tom Thibodeau was forced to renege on his benching of Walker for nine games a week ago in Boston when the Knicks found themselves without virtually any other guard due to both injuries and a COVID-19 outbreak within the team.

All Walker has done since then is score 29 points in that game against the Celtics – his first back in Boston since being traded away this summer – score 21 in a win over Detroit, pour in 44 in a loss to Washington on Thursday and then put up Saturday’s triple-double to beat Atlanta.

Even before Saturday’s win, however, Thibodeau had seen enough to declare Walker had earned his starting spot back on a permanent basis, now that the Knicks are returning to full strength. There had been some question as to whether New York would return to Walker sitting and Alec Burks starting at point guard.

But Thibodeau – who had said after Friday’s practice he wants to get New York’s bench unit back to playing like it was earlier in the season when Burks was part of it – said Walker would be staying in the starting five, and Burks would be coming off the bench.

“No,” Thibodeau said before the game, when asked if keeping Walker in the starting lineup now that the team is getting healthy was a tough decision. “Whatever gives us the best chance to win, that’s what we have to do. So, you know, that’s what we’re doing.”

It didn’t appear that would be what Thibodeau was doing when Walker was sitting out nine straight games as he chose to go in another direction at point guard. During that stretch, the coach seemed to go out of his way to avoid playing Walker – to the point he even played little-used forward Kevin Knox over him in a game the Knicks were shorthanded.

During those games, the Knicks went 1-8. They’ve split their four games since Walker returned to the court, including Saturday’s victory. And while Walker didn’t have the prettiest statline Saturday, including shooting 3-for-12 from the field, Thibodeau was thrilled with how he played, and said he’s noticed a different attitude from his point guard since he put him back on the floor.

In particular, Thibodeau said he felt Walker was deferring too much to the players around him as he tried to fit into a new team, and that he’s been far more aggressive over the past four games.

“The game tells you what to do,” Thibodeau said. “That’s what I loved about the way he played. I didn’t think he forced anything. They put size on him, they were aggressive with their pick and roll coverage against him, and he didn’t fight it.

When told of Thibodeau’s assessment that he’s approached things with a different mindset since his return, Walker immediately agreed.

“I have,” he said. “That’s the exact mindset I’ve had. Just come out and be aggressive. I just have a tendency to kind of not want to step on toes and I think that’s what I did early on. I was here and I wasn’t being as aggressive. But I think being out and seeing how the game has been going and flowing put me in a different mindset.”

It’s a mindset the Knicks would also like to consistently see from Julius Randle. Coming off what easily was the best season of his career last year, Randle’s struggled to live up to that form over the course of this season, including a drop from 41 percent from 3-point range last season to 32 percent this year.

Saturday, though, saw Randle put together one of his best performances of the season, finishing with 25 points, 11 rebounds and three assists while shooting 9-for-15 from the field and 6-for-9 from 3-point range. It was the first time Randle had hit at least half his shots since a win over the San Antonio Spurs on Dec. 7.

He said that, like Walker, he was deferring too much early in the season, but that he’s trying to play differently now.

“I think we’re just feeding off each other,” Randle said. “I think we were deferring a little too much, or trying to figure out how to play with each other, and those things take time. We kind of got a second shot at it.

“I’m happy for him. As a teammate, as a brother, I’m happy for him that he’s able to come out and be who he is. I’m sure when he signed to come here this is kind of what he envisioned, playing the type of basketball he’s playing right now. So I think we just honestly feed off each other and the team will go as we go.”

That certainly was the case Saturday, as Walker was serenaded with chants of his name as he checked out of the game with a couple minutes to go, kicking off a raucous victory celebration that included an eye-popping between the legs dunk by second-year forward Obi Toppin with a minute to go and the game out of hand.

But for Walker, after spending three weeks wondering if – or when – he’d get back on the court again, he said all of that is now water under the bridge.

And, he said, it wound up even being a positive thing for him once he did return to the starting five.

“I’m over it,” Walker said. “It don’t matter anymore at this point. I just take it as a blessing. I think it was a blessing in disguise, to be honest.

“God just works in mysterious ways, man. He’s blessed me, he’s helped me stay humble, grounded, and he just got me through a tough situation. I just continued to work, and time goes on and guys go down, and I’m back. First game against my old team, I’m back in the starting lineup, and the rest is history from there.

“Everything happens for a reason.”