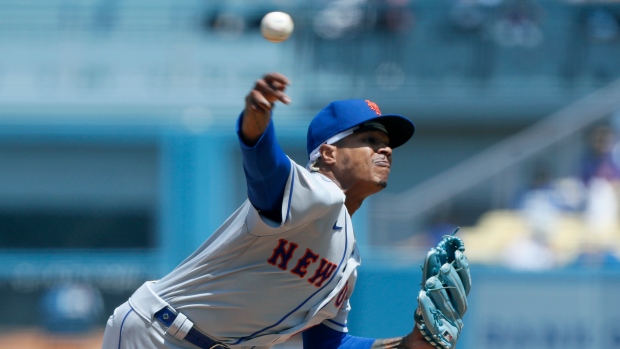 LOS ANGELES (AP) â€” Javier BÃ¡ez had an RBI double in the first inning of his first game back from injury, J.D. Davis homered and drove in four runs, and the New York Mets snapped the Los Angeles Dodgers’ nine-game winning streak with a 7-2 victory Sunday.

Marcus Stroman (9-12) pitched six innings of four-hit ball for the Mets, who avoided a four-game series sweep and a seven-game season sweep at the Dodgers’ hands with just their second win in 10 games overall.

BÃ¡ez made an immediate contribution in his return from an 11-game absence due to back spasms, driving in a run and scoring another during the Mets’ three-run first against David Price (4-2).

BÃ¡ez added a two-out double in the seventh for his second multi-hit game since joining the Mets last month from the Cubs. Davis quickly brought him home by connecting off Phil Bickford for his first homer since July 17, ending a 33-game drought.

Davis also drove in runs with a single in the first and a bases-loaded walk in the ninth.

Stroman earned his third win in 13 starts despite allowing several hard-hit balls early on by the Dodgers’ powerful lineup. The veteran right-hander gave up two runs and two walks with six strikeouts.

The Mets had been 3 for 47 with runners in scoring position against the Dodgers this season before the first inning, when Davis and Jonathan Villar both came through. Los Angeles had outscored its opponents 10-0 in the first inning during its winning streak.

Veteran reliever NeftalÃ­ FÃ©liz threw a perfect eighth inning for Los Angeles in his debut for his seventh major league team. The Dodgers signed FÃ©liz to a minor league deal last month shortly after Philadelphia designated him for assignment.

FÃ©liz was the 36th pitcher this season for the Dodgers, whose staff has been dogged by constant injuries.

Shane Greene then became the Dodgers’ 37th pitcher in the ninth, but he was pulled after giving up a one-out single, hitting two Mets with pitches and then issuing a bases-loaded walk to Davis after getting ahead 0-2.

Mets: BÃ¡ez had been out since Aug. 10. New York went 3-8 without him. … SS Francisco Lindor should return early this week from his five-week absence with a right oblique strain, manager Luis Rojas said. … Davis stayed in the game after being hit on the hand by a bad-hop grounder in the fourth.

Dodgers: Julio UrÃ­as (13-3, 3.29 ERA) is expected to return from his injured list stint with a bruised calf to start the series opener at San Diego on Tuesday.