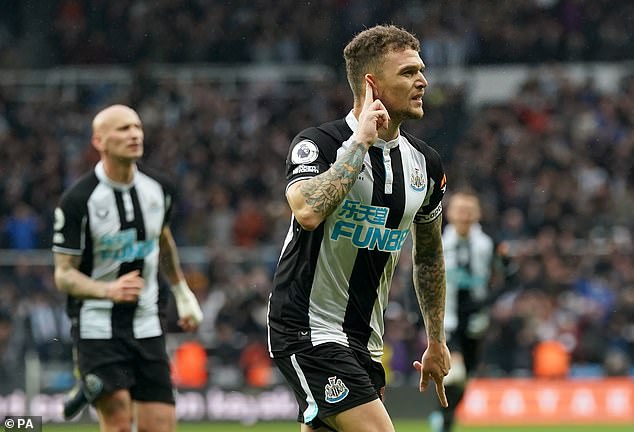 By Olly Allen for Mailonline

Newcastle duo Kieran Trippier and Callum Wilson hope to be back in action by the end of April.

Trippier has been out for the past five weeks and Wilson hasn’t played since late December, so they will be a huge boost for Eddie Howe’s side when they return.

The Magpies have emerged from relegation danger over the past two months and currently sit nine points above the drop zone, but have lost their last two games.

According to Telegraph, Trippier and Wilson have both targeted the home game against Crystal Palace on April 20 as their return date. Newcastle will travel to Norwich three days later if the meeting with the Eagles comes too soon.

Despite the club’s rise in the standings, the pair remain two of the team’s best performers and have been noticeably missed.

Trippier, 31, proved to be a revelation after completing a £12m move from Atletico Madrid in January.

He scored two free-kicks in four Premier League appearances and added leadership and organization to the Newcastle side before breaking a bone in his foot against Aston Villa on February 13.

The full-back has now taken off his protective boot and is able to put weight on his foot, but is still walking using crutches.

The Telegraph say medical staff are happy with Trippier’s progress and hope he can race again in the next fortnight.

Meanwhile, Wilson remains Newcastle’s top scorer this season with six goals despite being sidelined for a total of four months of the campaign.

The striker missed the whole of September with a hamstring problem and then suffered an Achilles tendon injury against Manchester United on December 27 from which he is currently recovering.

Wilson, 30, started running during Newcastle’s hot weather training camp in Dubai according to The Telegraph and hopes to increase his workload – which will include a return to full contact training – during the week next.