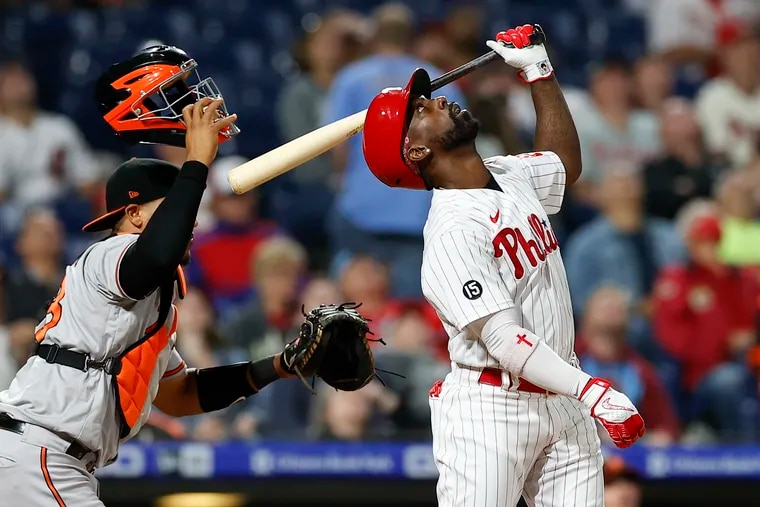 Bryce Harper walked, bat in hand, a few steps down the first-base line as his 401-foot fly ball landed in the glove of Baltimore Orioles center fielder Cedric Mullins, whose back was pressed up against the fence in the ninth inning Monday night.

It was that kind of game for the Phillies. Again.

File a 2-0 dud to the Baltimore Orioles â€” the 102-loss Baltimore Orioles â€” with those three losses in a row last month in Arizona or the three to Colorado at home a few weeks ago. The Phillies keep stumbling against the worst teams in baseball, and it may end up costing them a playoff spot.

â€œItâ€™s not how you want to start the homestand, but it doesnâ€™t tell the whole story,â€ manager Joe Girardi said. â€œWeâ€™ve got to turn it around tomorrow and letâ€™s see what happens the rest of the week.â€

Indeed, it was one loss in the context of a three-game series. But the Phillies will resort to piecing together Tuesday nightâ€™s game with their bullpen, albeit against the Oriolesâ€™ bullpen, to avoid losing a series to the worst team in baseball.

With Monday nightâ€™s setback, the Phillies slipped to 76-74, three games behind the division-leading Atlanta Braves, who won in Arizona against the 102-loss Diamondbacks. If the Braves go 6-7 in the next 13 games, the Phillies would have to go 8-4 just to force them to play a makeup game against Colorado on Oct. 4.

Girardi tried to warn everyone. A few hours before the game, he noted that Orioles starter John Means is a â€œreally tough pitcher.â€ And sure enough, Means held the Phillies to four hits â€” all singles â€” before an announced crowd of 21,440 at Citizens Bank Park.

â€œI thought he threw a good game,â€ Girardi said. â€œI thought once we got him out, maybe weâ€™d have a chance. We just werenâ€™t able to come up with a big hit.â€

Means is a former All-Star. He threw a no-hitter earlier this season and has a 3.25 ERA. But the Orioles had also lost the 28-year-old left-handerâ€™s last eight starts. They had dropped eight of their last nine games overall.

Girardi thought Meansâ€™ changeup, in particular, gave the Phillies trouble. They had one serious rally against him, putting two on with one out in the seventh inning as his pitch count climbed above 100. But Means got Didi Gregorius to ground into a fielderâ€™s choice before Freddy Galvis flied out against reliever Cole Sulser.

The Phillies, who were shut out for the ninth time this season, took a few big swings in the ninth inning. But Harper skied a ball to the wall in center field to open the inning before Realmuto flew out to deep right and Andrew McCutchen popped out.

Ranger SuÃ¡rez entered having given up more than one run in only two of nine starts. The Orioles tagged him for two runs in the first inning on four singles. They seemed to be sitting on his signature sinker, and he didnâ€™t locate with his usual precision.

But SuÃ¡rez shut off the spigot after that and got through the sixth inning in a career-high 102 pitches.

SuÃ¡rezâ€™s biggest pitches came in the second inning. With two on and one out, he fell behind 3-0 to slugging Ryan Mountcastle but got him to foul off three pitches in a row. SuÃ¡rez uncorked a full-count sinker and rolled a double play to hold the margin at 2-0.

â€œThe location of my pitches wasnâ€™t there in the first inning,â€ SuÃ¡rez said through a team translator. â€œBut then after that I continued doing what I usually do, which is to attack hitters. I was able to keep the score the way it was to give us a chance to win. Unfortunately we didnâ€™t get the result that we wanted.â€

It isnâ€™t hyperbolic to say SuÃ¡rez is having a historic season. Since 1893, when the mound distance was established at 60 feet, 6 inches, heâ€™s the fourth Phillies starter to allow three runs or fewer in each of his first 10 starts of a season, joining Zack Wheeler (2020), Curt Schilling (1998), and Tommy Greene (1993).

With two on and one out in the seventh inning, Girardi stuck with Gregorius against Means even though the shortstop is batting .162 against left-handed pitching. Ronald Torreyes, a righty-hitting option on the bench, is in a 1-for-18 slump.

â€œIâ€™ve seen Didi have so many big RBIs for us and for me,â€ Girardi said. â€œI thought he got himself in a pretty good count and had a pretty good swing. He just hit it right at [first baseman] Mountcastle.â€

Â» READ MORE: How a photo finish in the Phillies-Braves divisional race could be even wilder than expected

Raise your hand if you had Matt Vierling starting â€” at first base, no less â€” in a pivotal late-season game. But there he was, making his third start in four games and batting in the heart of the order and delivering one of the Philliesâ€™ four hits against Means.

â€œHeâ€™s done a very good job against left-handers,â€ Girardi said. â€œHe had a start against a right-hander the other night and did a very good job. I love his athleticism. His ability to play first and all over the outfield has been big for us. Iâ€™m very pleased with what heâ€™s done.â€