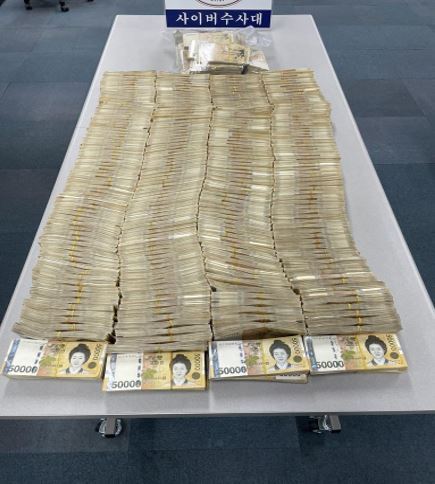 BUSAN – Two illegal sports betting networks, worth a total of 900 billion won ($ 797 million), have been dismantled, leading to the arrest of 17 suspects, Busan police said on Monday.

The agency said its cybercrime investigation team apprehended 38 people and arrested 17 of them for illegally operating sports betting sites. Seventeen users of the gambling sites were also convicted of violating the national law on the promotion of sport, he said.

Police are still looking for one of the main culprits in his 40s, who fled overseas and was placed on Interpol’s most wanted list.

The fugitive is suspected of operating an illegal gambling site in South Korea from March 2016 until recently, which was worth 800 billion won and had around 3,300 members, after setting up servers in Vietnam, China and in other foreign countries.

He is accused of taking illegal profits while managing employees through various teams in charge of membership management, currency exchange, bulletin board management and others.

Police say the fugitive helped one of his co-conspirators set up an independent online gambling site in 2018 by imparting operating know-how and cash-back service to him.

The co-conspirator is accused of operating an illegal sports betting site worth 100 billion won for around 1,800 members from June 2018 to March of last year, police said.

The large-scale arrests came after police investigators raided the offices of both gaming sites and the residences of their operators.

Police said they seized cash and real estate worth 8.12 billion won from the arrested suspects. The confiscated items included 1.95 billion won in cash and three apartments and two detached houses, all located in the capital region, police said, adding that the properties appear to have been purchased with illegal profits. (Yonhap)