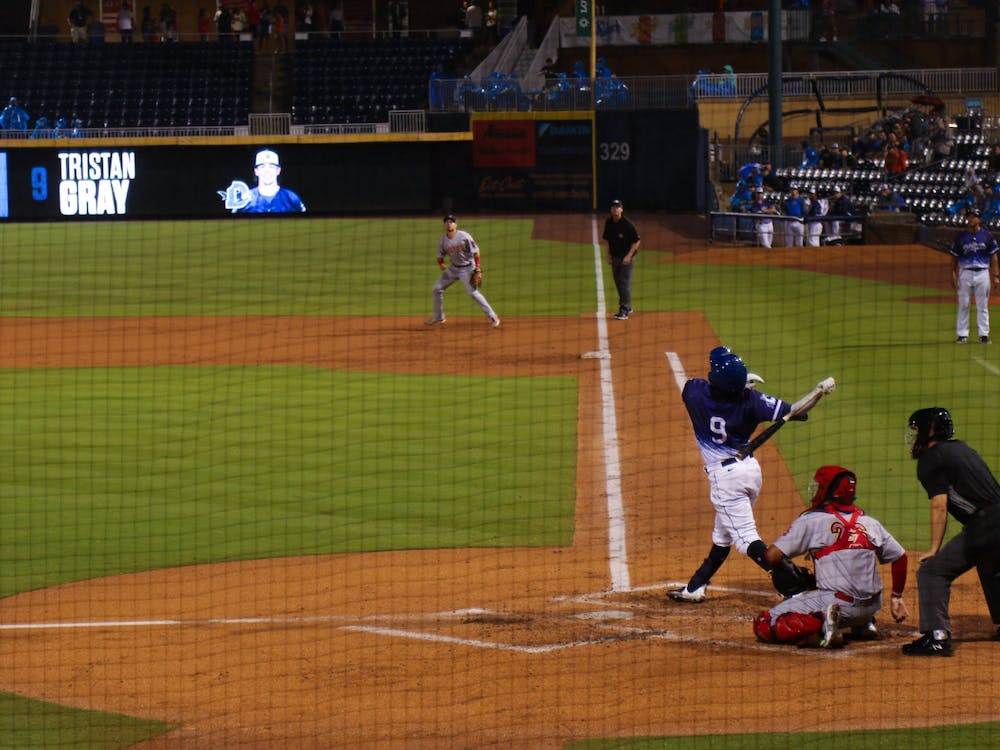 Itâ€™s 6 p.m. on Aug. 6. The rain falls gently but steadily, which means the Durham Bulls game has been postponed.

Iâ€”a person who knows nothing about baseballâ€”have a ticket to see the Durham Bulls, the cityâ€™s beloved Minor League Baseball team, play the Memphis Redbirds. Itâ€™s going to be my first Bulls game. But the overcast weather has delayed the experience.

I spend the downtime stalking the Durham Bullsâ€™ extraordinarily active Twitter feed and convincing my roommate, junior Ava Ganeshan, that this trip is a good idea. The number of professional sporting events the two of us have attended could be counted on one hand, and Iâ€™m embarrassed to confess that I donâ€™t know what a â€œcrackerjackâ€ is.

After three long hours, the Bulls confirm the tarp has been lifted from the field. Ava and I suit up in rain gear and face masks and hop in a car to Durham Athletic Park.Â

The air is heavy and wet, and my clothes stick to my body. The seats Iâ€™ve chosen are completely uncovered, and rain falls on our jackets. But fans around us donâ€™t seem bothered by the weather. Umbrellas open and drinks in hand, they yell passionatelyâ€”mostly unmaskedâ€”at the opposing team and, as if on cue, begin choreographed clapping rituals. Ava and I are notably out of our element, two clueless outsiders in a crowd of dedicated fans.Â

The game is paired with overpriced, oversalted buttered popcorn and obvious realizations regarding baseball. Ava and I take turns regaling each other with our epiphanies.

â€œThe pitcherâ€™s mound is so named because the pitcher stands on it and it is a mound!â€ I tell her.

â€œThe lyrics â€˜three strikes youâ€™re out of the old ball gameâ€™ is an actual baseball rule!â€ she adds, laughing.

â€œThe phrase â€˜peanuts and crackerjacksâ€™ refers to snacks genuinely sold at the stadium,” I point out, gesturing towards the peanut shells smashed beneath our feet.Â

Get The Chronicle straight to your inbox

Signup for our editorially curated, weekly newsletter. Cancel at any time.

Eventually, Ava and I slip into some covered seats slightly to the right of home plate to get closer to the action. To our left sit two passionate fans who boo loudly, dedicated to destroying the self-esteem of all Redbirds players. To our right is a popcorn-loving spectator, unafraid to give criticism to athletes on either team.Â

â€œI wasnâ€™t expecting a lively fan base for a triple A team but the Durham Bulls fans were super fun,â€ says junior Morgan Feist after the game. â€œIt was the energy of the crowd and the way people were genuinely into the game.â€

Caught up in the stadiumâ€™s palpable excitement, I start chanting and clapping. Though I understand little of the scoring and game play, I blend into the crowd, booing when the Redbirds (infrequently) score and cheering madly when Dalton Kelly and Josh Lowe hit home runs back to back.Â

â€œThereâ€™s a larger element of surprise at a Minor League game than a Major League one. You never know whether theyâ€™ll make the catch or make a good throw which makes for fun moments you can only find in Minor League Baseball,â€ Feist says.Â

Towards the end of the game, the Bulls repeatedly â€œwalk,â€ as the Redbirdsâ€™ pitcher continues to throw pitches out of the strike zone. (I had to look all of this up.) Though the Bulls’ score climbs to 11 runs in the sixth inning, the crowd erupts in thunderous applause when the Redbirds pitcher finally makes a good pitch.

You read that right. We are cheering for the other team.

On Friday and Saturday game nights, the Bulls typically put on a fireworks show that can be heardâ€”if not seenâ€”across Durham. But because of the rain, the show is canceled tonight.

Durham Bulls fans, however, donâ€™t need fireworks to celebrate the 16-3 win. They indulge in cheering and clapping, and Ava and I dutifully join in.Â

In this moment, we arenâ€™t strangers to the baseball scene who had just learned the basics of the game, fumbling cheers and struggling to follow the clapping patterns. We are fans celebrating an absolute smackdown of the Redbirds and relishing a win at home.

â€œI walked in as someone who didnâ€™t know anything about baseball, and I left wanting to buy a [Durham Bulls] shirt,â€ Ava says after the game.Â Â

Itâ€™s been a few months now, and I know summer is over, not because the leaves on the Engineering Quad are turning red and orange or because thereâ€™s a chill in the air. I know itâ€™s over because the Durham Bulls season is over. But Ava and I have t-shirts to wear when games start back up in April.

Preetha Ramachandran is a Trinity junior and senior editor of The Chronicle’s 117th volume.