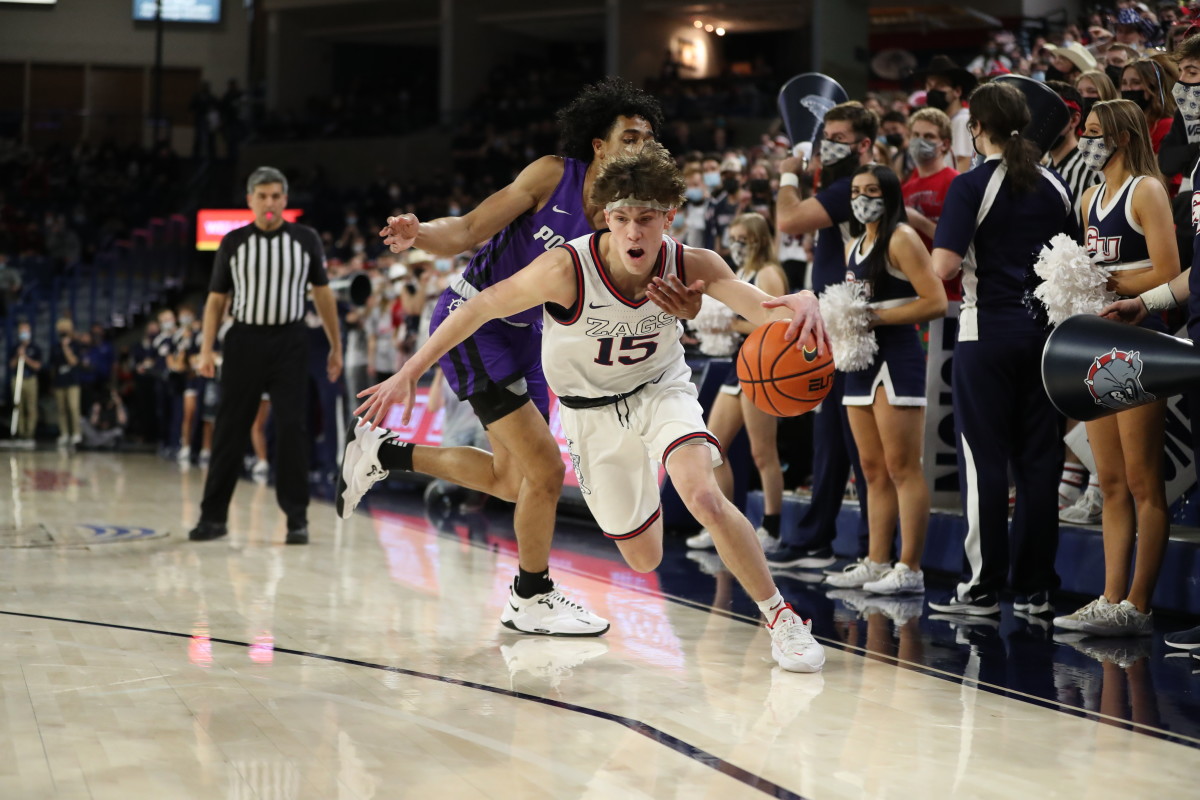 The Bulldogs (17-2, 6-0 WCC) were coming off the heels of a dominant win over Loyola Marymount on Thursday. With the win over Portland, it marks the sixth straight 6-0 start to WCC play and 64th straight win at home.

For the Pilots (11-10, 2-4 WCC), the new era of UP basketball has gotten off to a rocky start under first-year head coach Shantay Liggins. A strong showing in the nonconference slate has not translated to success in WCC play, albeit COVID-19 postponements have not helped the cause. Thursday’s win over Pacific marked the Pilots first home conference game of the season and have now dropped three of their last four games.

Here’s how GU took care of business at home against the Pilots:

It might’ve been a clear and chilly night in Spokane, but the red-hot Zags made it rain inside the McCarthy Athletic Center.

Rasir Bolton kicked off the barrage with a step-back jumper at the top of the arc on the first offensive possession. Back-to-back 3-pointers from Nembhard and Holmgren officially opened the floodgates for the Zags, as they started 5-for-7 from deep. With the Pilots giving up open looks from everywhere, even Drew Timme got in on the action with an uncontested 3-pointer of his own, his 5th on the season.

From there, the tone for the night was set.

“[Portland] picked their poison and chose not to guard us,” GU head coach Mark Few said. “We took the right [3-pointers] for the most part.”

UP was set on defending the paint to limit Timme’s effectiveness as a scorer, but it didn’t matter. As extra defenders came to double team him in the post, the junior patiently waited to rip apart the Pilots defense with his passing ability. Despite the results, Portland’s lack of adjustments resulted in 18 3-point attempts from the Zags in the first half.

With time running out, Watson capped off the opening period with a 3-pointer from the right elbow to give GU a 48-28 lead. The Gonzaga Prep alum led all scorers with 14 points while shooting a perfect 5-for-5 from the floor.

“This is a good shooting team,” Few said. “I think it always has been, it’s just sometimes we make these generalizations after one game or two games.”

As students clamored for their free taco coupon, the Zags delivered on their end of the bargain. Holmgren knocked down one of GU’s 11 second half 3-pointers for the first points of the period. Later, Bolton connected on a pull-up from deep to make it a 26-point ballgame before back-to-back 3-pointers from Nembhard sent fans home with tacos on their mind.

More importantly, however, history was made after Julian Strawther set an arena-record with the 17th 3-pointer of the night.

Early on into his collegiate career, Hunter Sallis’ role was a big question mark. Even as a five-star recruit, playing time was scarce, including 10 minutes of action combined between the Texas and Duke games. With his raw athleticism and energy, surely Coach Few would maximize the young guard’s potential in some capacity before season’s end.

Sure enough, Sallis has become an integral piece as an intense defender on the wing.

Despite not stuffing the stat sheet, Sallis prevented his opposition from doing so in the process.

He smothered Portland’s Moses Wood in the first half, ripping the ball away from the UNLV transfer on consecutive possessions, including one that was finished off with a one-hand dunk.

“[Sallis] is starting to do that every game,” Few said. “He’s really asserting himself and showing his quickness.”

The Pilots might not have shown up defensively, but the Zags’ young guys sure did. After Sallis’ dunk, Holmgren knocked the ball out of Chika Nduka’s hands as Nembhard dove on the floor for the loose ball. Sallis recovered for GU before dumping it off to Anton Watson for the transition bucket.

Down big, Portland’s frustrations sweltered beyond control. With four minutes left in the first half, Strawther was shoved from behind on a layup attempt, resulting in extra free-throws. Fouls were followed by each side exchanging words as the game became chippy despite the wire-to-wire score. Watson, who was the victim of a hard foul as well, was charged with his first technical foul of his career during a timeout break.

The Pilots’ attempt to fluster the Zags was all for not, especially with the game essentially decided at halftime. A whopping 11 second half 3-pointers put the cherry on top of what was an offensive clinic by Gonzaga.

The Bulldogs are back in action next Thursday at 6 p.m. when they hit the road to take on San Diego. GU has won the previous 14 meetings, with its last loss in the series coming in 2014.