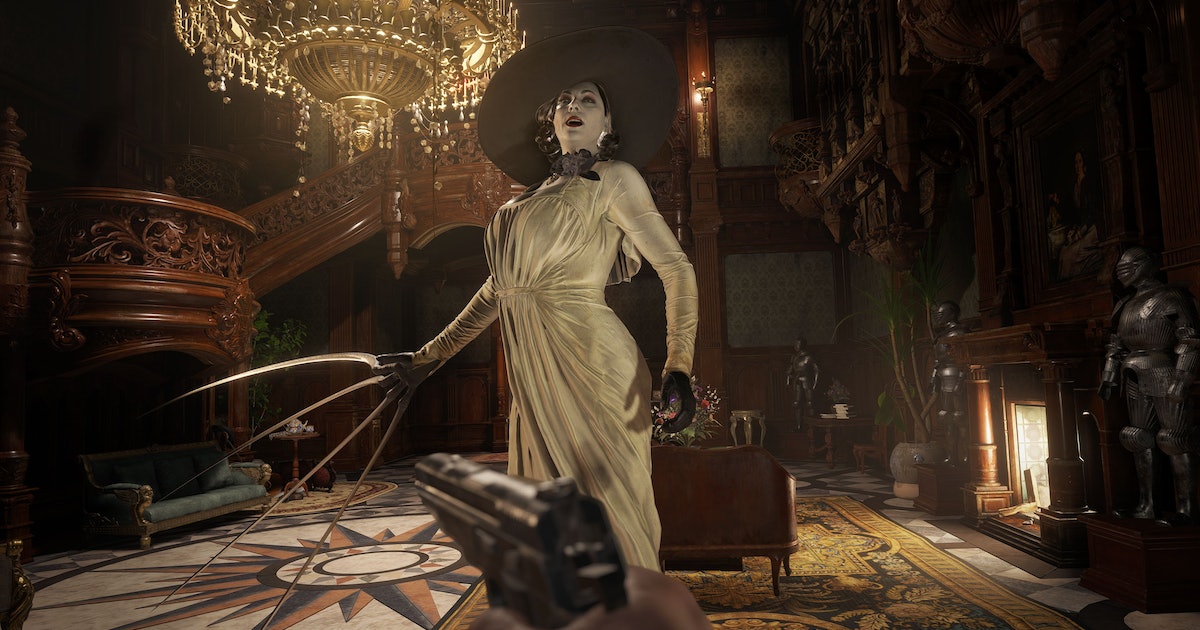 Both games feature first-person gameplay and center on the protagonist Ethan Winters, who is almost wholly anonymous: his face is hidden in advertisements and in the game. All we know of Ethan is a back-lit silhouette and set of hands, which is what players project onto as they play.

Some players have suggested that their experience of the damage to Ethanâ€™s hands stays with them after playing, motivating commentaries on sites like Gamerant. On other game commentary sites like Kotaku and IGN, writers have joked that someone at Capcom has a hatred of hands.

On the pop-culture site The Mary Sue, the siteâ€™s fandom editor discusses how Ethanâ€™s hand damage has a significant role in how his character develops.

In Biohazard and Village, players experience embodiment through Ethanâ€™s hands, and in that experience, are encouraged to feel his trauma. The gamesâ€™ use of the first-person perspective builds the cultural and psychological projection and helps players feel like they are part of the experience.

Ethanâ€™s hands experience numerous traumas in the two games, paired with sound and voice acting that expresses pain and suffering. His hands are cut, stabbed, bitten, slashed, and removed brutally, and both games keep the hands visible throughout gameplay.

In raising his hand to check his health monitor in Biohazard, or in his interaction with doors, ladders, and gates in Village, players are constantly aware of the damage.

In Biohazard, Ethanâ€™s left hand is violently removed with a chainsaw and inexplicably reattached with staples and medication; in Village, Ethanâ€™s right hand is removed â€” after he has pulled hooks through his hands and had fingers bitten off.

He must pick up his hand, which appears in the inventory as â€œsevered hand.â€ He heals by pouring medication over his hands, removing the damage, and inexplicably reattaching severed limbs.

Why do these games make us so aware of Ethanâ€™s poor, damaged hands?

Theories of game bodies and avatars often focus on the psychology of projection and identity. Professor of film and media studies Bob Rehak describes embodiment:

â€œPlayers experience games through the exclusive intermediary of another â€” the avatar â€” the â€˜eyes,â€™ â€˜earsâ€™ and â€˜bodyâ€™ of which are components of a complex technological and psychological apparatus.â€

That avatar body is how we understand the game â€” how we play. Film theorist Torben Grodal discusses immersion as part of our emotional response.

He writes that â€œa player of a video game is personally responsible for the outcome.â€

A playerâ€™s assessment of her potential determines how she experiences the monster: with fear, if the monster presents a challenge, with despair â€œif he feels that he has no coping potentialsâ€ or with â€œtriumphant aggressionâ€ if she feels â€œamply equipped for the challenge.â€

As film and video game theorist Timothy Crick notes, the playerâ€™s projection is a means to â€œproduce high levels of dramatic tension and engagement.â€ However, games can shape that projection and feedback through our primary visual of the avatarâ€™s body: the hands.

Our engagement with our world is often mediated by our hands, so when a game wants to highlight violence or trauma, it may start with the hands. Identifying hands as an extension of ourselves has some cultural and psychological grounding.

The psychology of human association with our hands has been the focus of studies of the â€œrubber hand illusion,â€ which involves putting a rubber hand in oneâ€™s shirt sleeve and showing the fake hand receiving touch stimuli as the actual hand receives the same form of contact.

Research shows this isnâ€™t simply a mind game, as they have also observed a physical response. In just a few minutes, the brain signaling shifts to send weaker electrical signals to the real hand.

Sound reinforces the visuals as Ethanâ€™s physical suffering is audible and visceral. As Elaine Scarry discusses in The Body in Pain, pain is beyond explanation and language.

Scarry notes that while we can see and sympathize with pain, drawing on our own experience, we cannot understand someone elseâ€™s pain.

Ethanâ€™s expressions are more utterance than speech: groaning while climbing a ladder with a partial hand, sounds of exertion while navigating obstacles, and yells of pain and fear. The game keeps us aware of how overwhelming Ethanâ€™s pain is through these expressions.

The trailers promoting the game also show intact hands; to see the damage is to see a glimpse of his trauma.

How we experience games is a focus of game design and digital storytelling. We are invited to feel discomfort with Ethan as he fights his way through the game locations around the Romanian village.

While we canâ€™t feel Ethanâ€™s pain, game designers encourage us to feel discomfort.

This article was originally published on The Conversation by Christina Fawcett at the University of Winnipeg. Read the original article here.