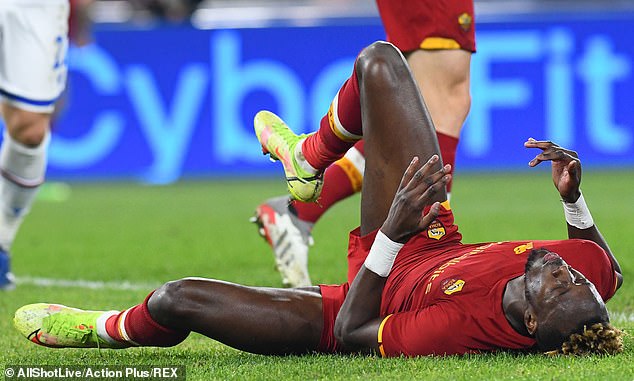 By Luke Augustus For MailOnline

Tammy Abraham has played down fears of being out for a while with the Roma forward confident he will return immediately after the winter break.

Abraham was sent off in the 47th minute of Roma’s 1-1 draw against Sampdoria on Wednesday night after suffering a problem with his right ankle.

Abraham was feared to be out for a while, but the England international insists he will be ready to play for their Serie A trip to AC Milan on January 6.

The Roma forward is confident he will be in good shape for Roma’s Serie A trip to AC Milan on January 6.

Seen cautiously exiting the Stadio Olimpico, Abraham told fans after the game: â€œThe ankle is fine, it hurts a bit. I will be there for Milan though. Merry Christmas and Forza Roma. ‘

Abraham’s claims appeared to be confirmed by Jose Mourinho who, while worried, doesn’t think the injury is too serious.

“I only saw blood, nothing more,” said the Roma manager. â€œHe couldn’t walk, in the second half we risked a bit because we lost a replacement. I don’t think it’s serious, but he’s definitely not doing well.

Abraham is having a great first season in the Italian capital since arriving from Chelsea this summer. The 24-year-old is the club’s top scorer in all competitions with 12 goals in 25 appearances.

Roma are currently in sixth place in Serie A, six points behind Atalanta who sit last in the Champions League.