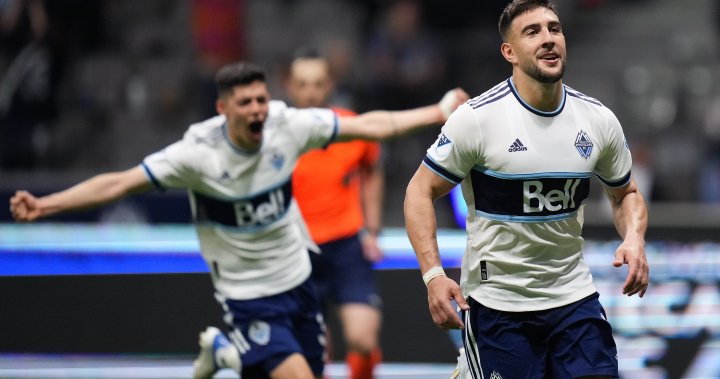 After a near-perfect homestand, the Vancouver Whitecaps are once again hitting the road — a road that has not been kind to the club this season.

The ’Caps (3-6-2) have yet to earn a single point away from B.C. Place this year, dropping all five matches they’ve played away from home.

“We need to win points against everyone. And now we need to really, really, really switch gears away because six games home 11 points … It’s a playoff run. Five games away zero points? It’s ridiculous,” he said. “We need to be much better.”

Vancouver is unbeaten in its last four games across all competitions, including a 2-0-1 record in Major League Soccer play and a 2-0 victory that advanced the club through to the next round of the Canadian championship.

But whether momentum from those wins will transfer from the turf at B.C. Place remains to be seen.

The Whitecaps’ next chance to vanquish their road demons will come on Sunday, when the team makes its inaugural visit to expansion side Charlotte FC (4-7-1).

While Charlotte’s coming off a 2-0 loss to CF Montreal, the league’s newest club has had a solid start and is 4-2-0 at home.

Karol Swiderski leads the team with four goals on the season, but the Polish striker hasn’t scored in his last four MLS appearances, a slump he’ll be eager to dump come Sunday.

2:27
New soccer association for those dealing with addiction

New soccer association for those dealing with addiction

Vancouver, meanwhile, will be without its leading scorer. Lucas Cavallini drew his fifth yellow card of the season in the Whitecaps’ 2-1 win over FC Dallas on Wednesday and is suspended from Sunday’s game.

It’s tough timing for the Canadian striker, who has two goals and two assists in his last three MLS games and earned a spot on the league’s ‘team of the week’ on Thursday.

The Whitecaps will look instead to Brian White, last season’s leading scorer. The 26-year-old American also scored on Wednesday, heading in his second goal of the season.

“Any time you see the ball hitting the back of the net, you’re looking to build off of that and continue that momentum,” White said. “So I’m going into the next game looking to score again.”

Cavallini knew his teammate was due to find his scoring touch and told White before Wednesday’s game that he would come off the bench to have a big impact.

“I’m glad he had the opportunity to do that. He’s been fighting hard, he’s been working hard and finding his form that he had from last year,” Cavallini said.

The Whitecaps will need other players to round into form if the club is going to climb the standings. Vancouver currently sits at the bottom of the Western Conference with 11 points but is just four points below the playoff bar, and the ’Caps have a game in hand.

While the start of the season hasn’t been what the team expected after making the playoffs last year, there’s a belief throughout the group that they have what it takes, White said.

“It’s unfortunate that we kind of dug ourselves into that hole again this year. But it’s all about taking it one game at a time — three points here, then moving on looking forward to three points the next game,” he said.

“So right now we’re just focused on Charlotte and doing everything we can to get three points on the road.”

WHEN:  Sunday, Bank of America Stadium

On Friday, the Whitecaps placed goalkeepers Isaac Boehmer and Cody Cropper and midfielder Pedro Vite on the league’s health and safety protocols. They will not be available to play.

With regular starter Thomas Hasal out with a fractured middle finger, that leaves no one left to take over goaltending duties.

NEW GOALIE: Niko Giantsopoulos, a 27-year-old from Markham, Ont., is being loaned to Vancouver from York United of the Canadian Premier League.

He was scheduled to play a match with York United Friday evening against Pacific FC at Starlight Stadium in Langford, B.C., and is being loaned to the Major League Soccer’s club for Saturday through Monday so he can play in Vancouver’s match with Charlotte FC on Sunday.

LOW GOALS: Sunday’s tilt may not see many balls put in the back of a net. Vancouver is tied with Kansas City for the fewest goals in the Western Conference (12), while Charlotte has the fewest in the East (10).

HELLO NEW FRIENDS: The Whitecaps have won their last three games against expansion teams, including a 2-1 victory over Austin FC last season.