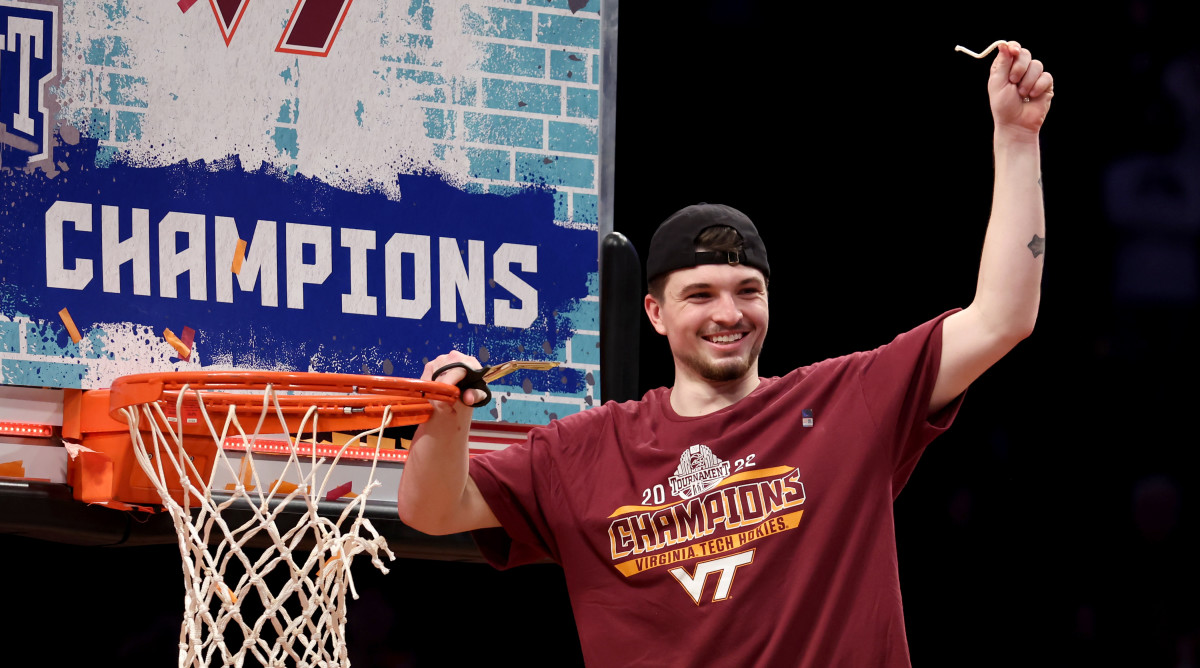 BROOKLYN — Virginia Tech guard Hunter Cattoor walked into the postgame press conference with a piece of the net tied around his hat and hand full of confetti he hastily shoved in his sock. He just wanted a keepsake, he said. Maybe it’ll find its way into a scrapbook making a tangible memory for a magical week.

Four games in four days for the Hokies produced four wins and the program’s first ACC tournament title. Along the way, Tech became the first team in the Mike Krzyzewski era to beat North Carolina and Duke on consecutive days. The Hokies came to the Barclays Center with it all to play for, sitting squarely in the middle of the bubble. Maybe in, maybe out. They showed they weren’t content leaving their NCAA tournament hopes in the hands of the committee as they beat Duke and made sure there will be no stress this Selection Sunday with an emphatic 82-67 win.

“I don’t watch the prognosticators and bracketologists,” head coach Mike Young said after the game. “I’m thinking, you get to the ACC final, even if we lose this game, holy cow we gotta be in the tournament, aren’t we? We are now, so to heck with that stuff. Our name will be called tomorrow and we’ll be excited wherever we may go.”

They couldn’t have pulled this win off without Cattoor, who ended up tournament MVP. He stepped up to score 31 points on an unconscious 7-for-9 from three-point range, including a blazing scoring start with 17 of Tech’s first 27 points. Even Coach K was effusive in his praise for Cattoor, saying that he “had a Klay Thompson night,” such was the nature of Cattoor’s catch-and-shoot brilliance with adept off-ball movement.

“I think the really cool thing about Hunt is that over the last month he hasn’t shot it so great,” said teammate and point guard Storm Murphy. “He’s owned that struggle. He’d talked about that, he’s embraced that, he hasn’t hid from it. So we’ve all come around him and continued to just tell him, ‘My goodness, you’re the best shooter in the gym everywhere we go.’”

This is only the second time in his three-year career Cattoor has hit more than five threes in a game. His previous career high of 27 points prior to this game was one of just two times he’d scored over 20 points. He was simply at his best in the biggest moment of Virginia Tech’s season.

“Honestly it was kind of a blur going through it,” Cattoor said. “I just felt like I was in my front yard shooting on my front goal. I dreamed of moments like this and it happened, so I’m grateful.”

This was Virginia Tech’s first ACC title game appearance in program history and they denied Coach K his 16th and final tournament title. They wrote their own chapter in what is supposedly the coaching legend’s storybook ending. Young, Murphy and forward Keve Aluma won a SoCon conference title together at Wofford in 2019 before they all came to Blacksburg (Cattoor signed to Wofford in the spring of 2019 as well before also following Young & Co. to Virginia Tech). They were champions then, and they’re champions again now. Tech enters the NCAA tournament red hot, but their road here has not been a straight path. They started ACC play 2–7 before finishing 13–2 heading into March Madness.

“As we’re 2–7 and losing games we’re not expecting to lose, that weight, that burden, that doubt creeps in. That’s tough, it’s tough to have that,” Murphy said. “It was a dark place. We didn’t want to be there, we didn’t expect to be there. But the resilience of this team and the belief never wavered. I think we had more belief in those moments even than we did in the summer and the preseason with all the expectations.”

On Wednesday night after an Darius Maddox sank a buzzer-beating three-pointer in overtime to beat Clemson, head coach Mike Young called the win “luckier than hell.” When asked what he calls this one, the answer was simple:

“Gratifying. A lot of people carrying a lot of water every day to help these guys. A special night. A really cool night.”

There were no smoke or mirrors on Saturday night en route to Virginia Tech’s first ACC tournament trophy presentation—only enough confetti to fill both shoes.