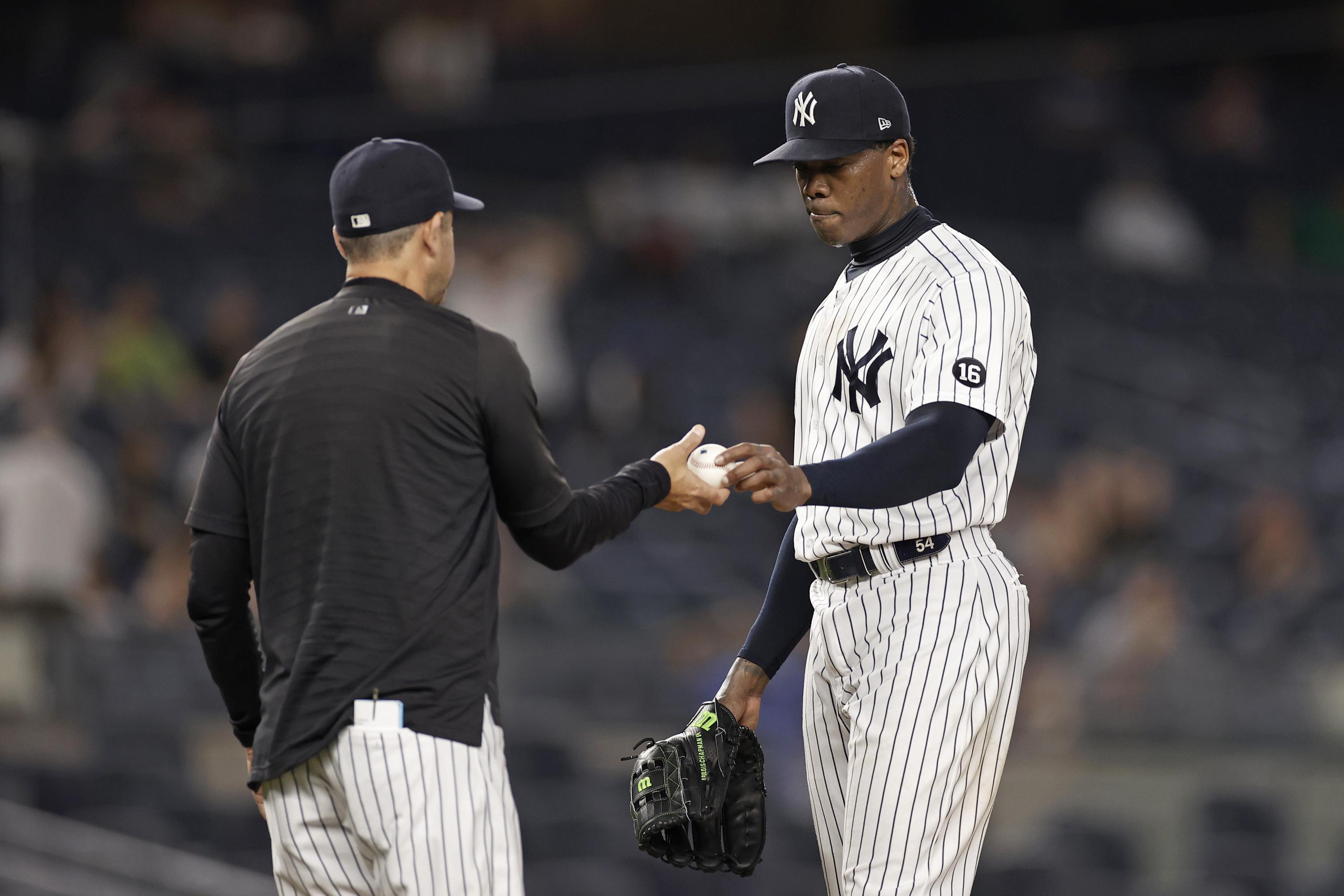 A look at whatâ€™s happening around the majors today:

The Yankees are in an unusual position entering their weekend Subway Series against the crosstown Mets â€” struggling underdog.

The Bronx Bombers are coming off a stunning 11-8 defeat to the Los Angeles Angels on Wednesday night, when All-Star closer Aroldis Chapman allowed a tying grand slam to Jared Walsh during a seven-run ninth inning. New York had powered ahead with a seven-run first inning against Angels phenom Shohei Ohtani. The Yankees are 41-39, fourth in the AL East, nine games behind first-place Boston.

Yankees owner Hal Steinbrenne r vowed Thursday to keep manager Aaron Boone, general manager Brian Cashman and the core of his team, but he did place the â€œmajority of the responsibilityâ€ for the supbar play on the players.

Left-hander Jordan Montgomery (3-2, 4.06 ERA) is set to pitch for the Yankees against Mets righty Taijuan Walker (6-3, 2.38). Gerrit Cole is slated to throw Saturday, while Jacob deGrom will miss the Subway Series after pitching Thursday night in Atlanta.

The Los Angeles Dodgers will visit the White House to celebrate their first World Series championship in 32 years.

President Joe Biden will welcome the team for a ceremony in the East Room. Los Angeles defeated the Tampa Bay Rays in six games last year in Texas. Because of the coronavirus pandemic, the World Series was played at a neutral site for the first time.

It will be the Dodgersâ€™ first visit to the White House since 1988, when President Ronald Reagan welcomed them after their championship season.

Los Angeles is in Washington for a four-game set against the Nationals. Dodgers manager Dave Roberts said Thursday that Trevor Bauer is still expected to pitch Sunday while police and Major League Baseball investigate an assault allegation made against the reigning NL Cy Young Award winner.

Milwaukee goes for its 10th straight victory when the NL Central leaders play at last-place Pittsburgh again. Christian Yelich and the Brewers have won nine in a row for the first time since April 2014, outscoring opponents 66-23 during the streak. Adrian Houser (4-5, 4.16 ERA) pitches against Pirates right-hander JT Brubaker (4-7, 3.82).

JosÃ© Abreu and the Chicago White Sox have scored at least seven runs in four straight games and will try to keep the streak going when they open a nine-game road trip with Lance Lynn (7-3, 2.06 ERA) on the mound in Detroit. Lynn should be fresh after pitching only three innings against Seattle on Saturday before the game was suspended due to rain.

Third baseman Yoan Moncada is expected to miss the series with a bruised right hand.

The AL Central leaders have won four straight after losing seven of nine. Theyâ€™ve scored 35 runs in those four games after managing only 20 in the previous eight.

The major league batting average jumped to .246 in June amid a crackdown by the commissionerâ€™s office on foreign substances utilized by pitchers, raising the season average to .239.

The season average is the lowest through June since it was .233 in 1968, the Elias Sports Bureau said Thursday. That was the last season before the pitcherâ€™s mound was lowered.

Major League Baseball officials began saying on June 3 that they intended to start stricter enforcement against the use of sticky substances used by pitchers to improve grips and spin rates, and umpires started checking all pitchers on June 21.

Atlanta is hoping for good news on star outfielder Ronald AcuÃ±a Jr. after he was a late scratch from Thursday nightâ€™s starting lineup against Jacob deGrom and the New York Mets with mid-back tightness.

AcuÃ±a was removed less than 20 minutes before the first pitch, replaced in the leadoff spot and right field by Ehire Adrianza. The slugger singled as a pinch-hitter in the eighth.

AcuÃ±a showed no signs of injury a night earlier, hitting a 447-foot homer during a 20-2 rout of the Mets. He leads the NL in runs, ranks second in stolen bases and third in homers.